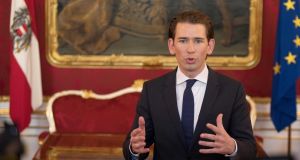 In the wake of the Dutch and French elections, and the defeats of Geert Wilders’s and Marine Le Pen’s respective parties, some commentators hailed what they hoped they saw as the eclipse of populism and the far right. The line had been held. But, as Mark Twain put it, “reports of my death are greatly exaggerated,” and in Vienna last weekend the corpse showed remarkable signs of life.

The success of Heinz-Christian Strache’s far-right Freedom Party in Austria’s election – in second place with 27 per cent of the vote – is in truth not a lurch back to the right but, sadly, the expression of the new normal in Europe. Along with the continuing decline of the once-great social-democratic parties that dominated the continent’s postwar politics, the post-crisis, post-Brexit reshaping of European politics and the political agenda, most notably on migration, continues apace.

The likelihood is that Austria’s Freedom Party, which had its roots in Nazism, will now claim a place in the country’s cabinet

The centre-left Social Democrats were relegated on Sunday to third place, the first time in a century that they have not been one of the two largest political parties.

But last month’s German election, which saw the anti-immigration Alternative für Deutschland (AfD) party surge into the Bundestag, and elections later this year in Italy, where Luigi Di Maio (31) leads the maverick Five Star Movement, are likely to confirm that the hard right is to remain a feature of the political landscape.

In the Czech Republic, Andrej Babis (63), a Trump-like oligarch who launched his own anti-immigrant party, Ano, looks set to become its next prime minister after Friday’s election. He describes Ano, whose politics are deeply unspecific, as a movement to overturn a culture of corruption among the political elite.

The likelihood is that Austria’s Freedom Party, which had its roots in Nazism, will now claim a place in the country’s cabinet, a prospect that would have been barely thinkable a decade ago and which, back in 2000, under a previous leader, prompted diplomatic sanctions from EU states.

Not so this time. Times have moved on and the far right rules, or is now part of, several EU governments. And the imposition of sanctions under the Lisbon Treaty would require clear violations of democratic values and constitutional rules.

But the Austrian election was really the story of the 31-year-old foreign minister Sebastian Kurz, who is set to become Europe’s youngest prime minister and who has spectacularly revived the fortunes of his centre-right People’s Party (OVP), which won the most votes in Austria, with about 31 per cent.

Some 58 per cent of Austrians voted for the OVP and Freedom Party, whose policies blurred indistinguishably

A political phenomenon who uses all the tricks and rhetoric of modern, post-politics campaigning, he has been fairly likened by one political scientist to a cross between France’s Emmanuel Macron and Hungary’s Viktor Orban. He is a potent blend of youth, vigour, outsider appeal and an unscrupulous, dangerous flair for populist rhetoric.

Kurz, unlike the open-door-generosity of his counterpart in the OVP’s sister party in Germany Angela Merkel, decided that the way to meet the challenge of the far-right was to co-opt its programme . The general election became about identity – anti-immigration and anti-Islamisation. Kurz denounced the “welcoming culture” towards refugees of 2015, and said migrants rescued in the Mediterranean should be returned to Africa, promising to slash the benefits for newly arrived migrants.

Kurz faced the choice which has divided the mainstream right in Europe: try to isolate a popular populist party, as in Sweden, or bring it into government and try to tame it, as in Norway or Finland. He picked the latter course.

In Germany his approach divides. “We see Kurz as a model for conservatives in Germany,” a senior figure in Bavaria’s Christian Social Union (CSU) told Reuters. “We applaud him. He will change the dynamic in Europe.”

After bleeding support to the AfD in the German vote, the CSU promises a far harder line on immigration – a headache for Merkel as she tries to form a new coalition government.

In the end some 58 per cent of Austrians voted for the OVP and Freedom Party, whose policies blurred indistinguishably.

For the European Union, the potential challenge from Austria is similar to that from Poland and Hungary, which welcomed the Kurz victory. But Kurz is strongly pro-European, though anti-Brussels, and the Freedom Party has muted its euroscepticism after losing last year’s presidential election, when voters made clear “they didn’t want it”.

Austria will also make a powerful ally to eastern European states opposed to the union’s policy of sharing the relocation of migrants, and will oppose further euro zone integration. Europe’s youngest head of state will be a thorn in the side.