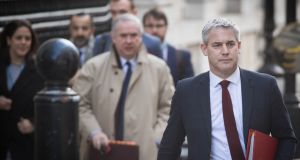 Brexit secretary Stephen Barclay leads his team out of his office including Attorney general Geoffrey Cox (centre left) as they leave Downing St in London for Brussels. Photograph: Stefan Rousseau/PA

Northern Ireland residents who wish to assert their Irish nationality and EU citizenship rights after Brexit are inadequately protected by the Brexit Withdrawal Agreement, a delegation from Northern Ireland told the EU Brexit task force on Wednesday.

The discussions focused on assurances being sought by London that the backstop would not be permanent. A Commission spokesman said that Mr Barnier told the Commission meeting today that “no solution had been identified at this point that is consistent with the Withdrawal Agreement including the protocol on Ireland which will not be reopened.”

Sources say the two sides did not manage to exchange suggested texts but the British team is expected to return on Friday following further technical level discussions.

British prime minister Theresa May’s “meaningful vote” early next week is said to hinge on whether Mr Cox can revise his legal assessment of the Backstop exit mechanism.

“These are very sensitive discussions,” Mr Cox said. “We are into the meat of the matter now. We have put forward some proposals, very reasonable proposals. We are now into the detail of the discussion.”

The Northern Ireland human rights group which met the task force included Belfast-based lawyers Prof Colin Harvey of Queens University Belfast, Daniel Holder of the Committee on the Administration of Justice, and solicitor Niall Murphy, as well as Derry-born Emma DeSouza who has been involved in so-far-successful litigation with the Home Office over her right to exercise an EU right to bring her US husband to live with her.

The DeSouza case, and specifically the requirement on her to renounce her UK citizenship in order to claim her EU rights,was part of the delegation submission.

But they also said Northern Ireland Irish citizens in a ruling by the Home Office would not be allowed to apply to register for the post-Brexit EU Settlement Scheme which helps EU migrants in the UK get their right to reside after Brexit.

Home Office Minister Caroline Nokes told the Commons on February 26th that “British citizens, including those with dual British/Irish or British/EU citizenship, are not eligible to apply for the EU Settlement Scheme. This is because, under Section 1(1) of the Immigration Act 1971, those with a right of abode in the UK (including all British citizens) cannot be granted immigration status.”

In breach of Belfast Agreement

The group argues that the ruling is in breach of the commitment to allowing equal respect to those claiming Irish citizenship under both the Belfast Agreement and the proposed Withdrawal Agreement. It would create a distinct class of citizens in the North with less rights than others and forces those who wish to continue exercising their EU rights after Brexit formally to resign their UK citizenship.

That is a lengthy and costly process, Ms DeSouza says, involving an assertion and proof of UK citizenship by people, including nationalists, for whom that assertion is anathema. They must then pay a charge of over £437 (€508) and may not leave the state for six months until their status is changed.

The delegation also raised the issue of the right of Northern Ireland-based Irish citizens to vote in the coming European elections but were told that this was a matter entirely for the Irish Government.