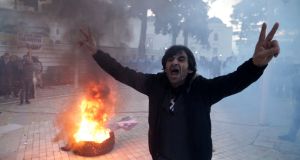 A supporter of the opposition party at an anti-government protest in front of the parliament in Tirana, Albania. Photograph: Florion Goga/Reuters

Thousands of people rallied in Serbia and Montenegro at the weekend, as anger around the region over threats to the rule of law and the EU’s alleged acceptance of autocratic leaders fueled talk of a pro-democracy “Balkan spring”.

In the two former Yugoslav republics and Albania, protest movements are growing and opposition deputies are boycotting parliament to demand an end to what they call the “state capture” of key institutions by corrupt leaders.

Demonstrators marched through Belgrade on Saturday to call for the resignation of Serbian president Aleksandar Vucic and for changes to election rules and state media that they say are heavily biased in his favour.

The protests began after an opposition politician was beaten up last November and have spread to some 60 towns and cities under the banner “One of five million” – a reference to Mr Vucic’s vow to defy his critics even if five million people took to the streets.

In neighbouring Montenegro, thousands of people joined the fourth protest in as many weeks against president Milo Djukanovic, who has dominated politics in the Adriatic state for three decades.

The demonstrations started when bribery claims against members of the ruling elite ignited widespread frustration with corruption and cronyism; they are organised by activists and intellectuals who claim to have no party links.

Anger over poverty and allegations of graft and electoral fraud have also sparked protests in Albania against the government of prime minister Edi Rama, and several arrests and injuries were reported in clashes between demonstrators and police late last month.

The Balkan neighbours are all aiming for membership of the EU, and Mr Rama has warned that “desperate opposition efforts” to unseat him “could be fatal” for Albania’s hopes of starting accession talks in June.

Opposition deputies in all three states are boycotting parliaments that they say merely provide a facade of democracy behind which unscrupulous leaders and their allies rule with impunity.

Critics of the EU across the Balkans accuse it of supporting these “stabilitocracies” – systems run by autocrats whose abuses of democracy are tolerated because they are seen as guarantors of stability in a complex region.

Budislav Minic, one of the protest organisers in Montenegro, said after talks on Friday with the EU envoy to the country, Aivo Orav, that “we are on the streets precisely because institutions do not function.”

“We do not want to destabilise or destroy the state but...we reject the status quo which, under the pretext of stability, refers to captured institutions,” Mr Minic said.

Brussels and Washington have urged Albanian opposition deputies to return to parliament, while EU foreign affairs spokeswoman Maja Kocijancic this week played down talk of a “Balkan spring” of pro-democracy protests and defended the bloc’s approach to the region’s governments.

She said the EU gave “praise when praise is needed... and we are also extremely critical”.

“The rule of law is absolutely of the utmost importance... and it’s a message that we continue to pass on to all our partners” in the Balkans, Ms Kocijancic added.