Putting a time limit on the Northern Ireland backstop would have the effect of removing it from the withdrawal agreement, the DUP’s Brexit spokesman Sammy Wilson has told MPs at Westminster. Video: UK Parliament TV 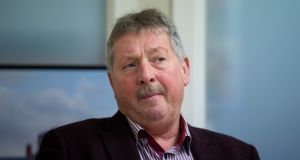 Putting a time limit on the Northern Ireland backstop would have the effect of removing it from the withdrawal agreement, the DUP’s Brexit spokesman has told MPs at Westminster.

Sammy Wilson told the Northern Ireland Affairs Committee that his party could vote for Theresa May’s Brexit deal if the backstop was time limited.

“I’m only telling you what the EU have said and what the Irish Government have said: once you do that, you have removed the backstop. If they didn’t want to have the withdrawal agreement totally destroyed, you could remove the backstop by imposing a time limit on it. That in effect has the same outcome – there is no backstop,” he said.

The EU has ruled out imposing a time limit on the backstop and hopes for a breakthrough have focused instead on strengthening an arbitration mechanism to determine when the backstop is no longer necessary.

Mr Wilson said the DUP, whose support for the Brexit deal is viewed as crucial to persuading Conservative euroceptics to vote for it, could not accept arbitration as a solution.

“That certainly is not a mechanism which we would accept, and I think for two reasons. First of all, that leaves us in exactly the same position as the current withdrawal agreement does, where somebody else decides whether the United Kingdom can break out of the backstop or whether it stays in the backstop.

“Whether we decide to alter the backstop or alter any arrangements we have with the EU should be the decision of this parliament and this government, not some independent panel of judges. And the second thing is an arbitration panel could drag on its deliberations for years,” he said. “We have made it very clear that there has to be an ability for a sovereign parliament and a sovereign government to make a decision about the future status of the United Kingdom as a whole in relation to the EU or part of the United Kingdom in relation to the EU.”

MPs will vote next week on Mrs May’s Brexit deal and if they reject it, they can choose between leaving the EU without a deal or seeking an extension to the article 50 negotiating deadline.

Mr Wilson said that a no-deal Brexit would be the result of the intransigence of the EU. And he dismissed as “scare tactics” a warning from David Sterling, the head of Northern Ireland’s civil service, about the severe economic impact of a no deal Brexit on the North.

“I don’t care whether he’s the head of the civil service or whether he’s Santa Claus, it really doesn’t matter. The fact of the matter is he’s got it wrong,” he said.

1 Open Ireland as soon as possible - Tourism chief warns of 'catastrophic' impact of pandemic
2 Bobby Storey: The IRA's planner and enforcer who stayed in the shadows
3 Full line up of junior ministers unveiled as Taoiseach accused by one TD of snub
4 Trump says Covid-19 will disappear after US reports record increase
5 Who are the new junior ministers? All their profiles are here
Real news has value SUBSCRIBE