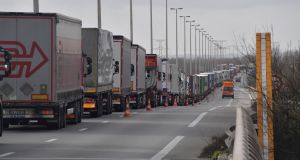 A picture taken at 10km from Dunkerque on the A16 highway between Dunkerque and Calais shows trucks stuck in a traffic jam on March 4th 2019 due to extensive controls by the customs officers protesting against the lack of staff and material ahead of the Brexit. Photograph: Philippe Huguen/AFP

Hauliers in the UK and Ireland are predicting that a no-deal Brexit is going to cause major problems for the haulage industry and for the general public.

Irish truck driver Joe Droohan told RTÉ radio’s Morning Ireland that Brexit had arrived early on Tuesday when he faced a delay of two and a half hours in the British port of Folkstone because of a work to rule by French customs staff.

En route from the UK to France, he explained that following British emigration and security checks he then had to go through checks with French customs for the first time in “three to four years”.

“These are delaying tactics which are causing a fierce backlog. Brexit has arrived early. When Brexit comes in it will be twice as bad.”

When he arrived in Calais, Mr Droohan said he saw a lane of trucks, which he clocked at 6.8km long, outside the port which included “a lot of Irish trucks”.

“This was all about cutting through the noise, an attempt by the French customs staff to illustrate what it will be like if there’s a hard Brexit on the 29th of March.”

He said there had been customs checks and permit checks on Tuesday, “things that don’t happen now will happen then. For Ireland a crucial land bridge will block up. Irish trucks will run into those delays.”

The actions on Tuesday were both a trade-union issue and a Brexit issue, he said, as French customs staff are demanding more staff and more pay. “This is a harbinger of what is to come,” he warned.

Just to let you know the queue of trucks now stretches from BELGIUM to Calais . That’s about 40 miles . It’s closed . You cannot use the A16 pic.twitter.com/9ZfuLyJoej

1000's of lorries now waiting on motorways both sides on tunnel as Eurotunnel work to rule. French police in evidence but none on M20 and car exit heavily obstructed A sign of what is to come? If you are planning journeys via Calais @AmandavMulligen @BeezzzzzBee @sarahbeattiegra

Mr McKenzie said the British government’s preparations for Brexit were “shambolic, far too little, too late”.

A recent trial involving 80 trucks had been a farce he said as 10,000 trucks go through the UK port of Dover daily.

“How could you possibly make that a useful test?

“We are 17 working days from a potential no deal Brexit which will be very unfortunate indeed for truck drivers facing 20km long queues and for the rest of us who rely on supplies, 95 per cent of which come on trucks.”

French customs workers began their protest on Monday at the northern ports of Calais and Dunkirk. The labour unions behind the protest action say the delays underline the need for more customs workers to be hired.

“We will overcome the shortcomings and lack of preparedness,” the French unions said in a joint statement before launching their protests. “But we want to alert the authorities to the state of disrepair of the customs administration.”

Train services between Paris and London suffered long delays on Wednesday as French customs staff continued to carry out further security checks to highlight the pressure Brexit could place on their workforce.

Train operator Eurostar said services were experiencing delays of up to two hours at the Gare du Nord in Paris because of the additional security controls.

“Feeling like a pawn in the Brexit game as I am currently stuck at Gare du Nord while French staff prove how terrible Brexit will be,” passenger Lucy Hagger wrote on Twitter.

A number of hauliers also took to Twitter to vent their frustration at the long tailbacks on both sides of the eurotunnel on Tuesday.

The ‘Ciaran the Euro courier’ account posted that he had passed “over 20 miles of trucks queuing to get into the ferry port and Eurotunnel”.

The same account later posted a map of northern France with the message: “Just to let you know the queue of trucks now stretches from BELGIUM to Calais . That’s about 40 miles . It’s closed . You cannot use the A16.”

Tweeting on Wednesday morning, P&Q ferries noted that while tourist traffic was free flowing, freights were experiencing delays before check in and the buffer zones in Calais and Dover were in use.

Another personal Twitter account, @bakerandgrower, tweeted that thousands of lorries were waiting on both sides of the tunnel. “French police in evidence but on M20 and care exit heavily obstructed. A sign of what is to come?” – Additional reporting, Reuters