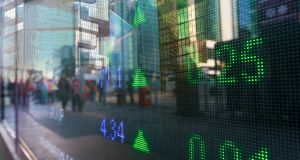 Neither currency nor equity markets have priced in a hard Brexit, sources close to the Central Bank have said. File photograph: iStock

Financial markets have yet to price in a hard or no-deal Brexit, sources close to the Central Bank said on Wednesday.

It is understood that more than 100 companies have applied to be overseen by the Central Bank and that the Irish regulator is roughly halfway through the applications. However, it is thought unlikely that it will get through all of them before the current March 29th deadline for Brexit.

The sources said there was concern within the Central Bank that commercial banks could take an immediate hit in the event of a no-deal Brexit, and that neither currency nor equity markets have priced that in.

Housing is understood to be the other major focus for the regulator, with the mortgage market still seen as “dysfunctional”. Sources close to the Central Bank suggest that it would like to see a “predictable and effective legal market where security on a house actually meant something for lenders”.

The concern about the housing market follows comments from Bank of Ireland’s chief financial officer Andrew Keating on Monday, when he said his expectation was that “the price of mortgages, particularly those longer-duration mortgages, will increase”.

Lack of competition in the market is seen by the Central Bank as one factor keeping interest rates in the Republic higher than in European counterparts, the sources said, adding that the legislative noise on the issue and the uncertainty surrounding that is a barrier to entry here.

But there is also ongoing concern about the low recovery rates on mortgage defaults. There is still no clarity within the regulator as to whether the issue with loan recovery is a one-off scenario resulting from the financial crisis or whether it is the new reality for Ireland in the future, sources said.

And it is understood that, despite widespread public concern about so-called vulture funds, there is a view among industry professionals that, in the words of one source, they can often “be easier to cut deals with”.

With small builders now in a better position to finance projects, it is understood the Central Bank will argue that it does not make sense to continue incentivising the market with the Help-to-Buy scheme that is due to end this year.