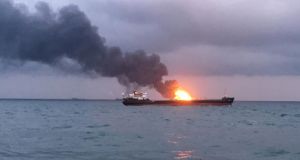 One of two gas tankers burning in the Kerch Strait between the Crimean and Russian borders in the Black Sea on Monday. Photograph: EPA/Kerch FM

Twenty sailors are believed to have died in the Black Sea after a fire on two ships suspected of delivering Russian fuel to Syria despite US sanctions.

Russian officials said the bodies of 10 crewmen were recovered and 10 sailors were missing, presumed dead, after flames engulfed the tankers on Monday night, near the Crimean peninsula that Moscow annexed from Ukraine in 2014.

Twelve members of the mostly Indian and Turkish crew survived and were being taken to Crimea by ship on Tuesday evening, after poor weather hampered plans to return them to land by helicopter.

Fire broke out when fuel was being transferred between the ships, which Russian officials said were just outside the country’s territorial waters at the time and had almost 4,700 tonnes of liquefied petroleum gas on board.

Russian emergency services said on Tuesday morning that search-and-rescue efforts in the area were being replaced by a recovery operation, because the missing sailors could not survive for hours in sea temperatures of just four degrees.

The vesselfinder.com website that tracks ships showed one of the tankers, known by the names Venice and Candy, to have been located just off Crimea on Sunday, having called at the nearby Russian port of Temryuk two days earlier.

The website’s last recorded position for the other tanker, called Maestro, was close to Istanbul on January 8th, when it was reportedly heading for Temryuk.

Last November, the US Treasury imposed sanctions on Russian and Iranian individuals and firms involved in shipping petroleum to Syria – where Moscow and Tehran prop up President Bashar al-Assad – and included the Maestro and the Venice on a list of tankers that delivered oil to his regime between 2016 and 2018.

At the same time, Washington highlighted ship-to-ship fuel transfers and the deactivation of vessels’ automatic identification systems (AIS) as “deceptive practices . . . used to obfuscate the destination of petroleum bound for Syria”.

Russia denounced the sanctions, and Reuters reported that the Tanzania-flagged Maestro and the Venice continued to operate and call often at Temryuk after the US announcement.

Ukraine’s ministry for occupied territories, which include Crimea, said the tankers had turned off their AIS transponders some time before the fire occurred.

“Despite the threat to the safety of shipping in the Black and Azov Seas and the risk to life, the Russian Federation is encouraging the mass deactivation of the AIS system on ships, and this case demonstrates again how Russia disregards the norms of international law,” the ministry said.

“These ships previously entered the closed ports of . . . Crimea and are violators of the regime [governing] the temporarily occupied territories.”

Ukrainian law bars foreign firms from doing business with Crimea, which Russia annexed in 2014 when a revolution in Ukraine brought pro-western politicians to power.

Tension soared close to Crimea last November, when Russian ships fired upon and seized three Ukrainian naval vessels and 24 crew as they tried to pass through the Kerch Straits from the Black Sea to the Sea of Azov, which the two countries share.