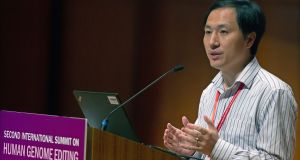 He Jiankui: drew condemnation when he revealed the birth of twins whose genes had been altered with the editing technique known as Crispr. Photograph: Alex Hofford/EPA

He Jiankui, the Chinese scientist who made the world’s first genetically modified babies, is expected to face criminal charges after a government investigation found that he falsified ethical review documents.

Dr He drew condemnation from scientists in China and abroad on ethical and safety grounds in November, when he revealed the birth of twins whose genes had been altered with the editing technique known as Crispr.

A second woman is pregnant with a foetus whose genes were edited by Dr He, according to an investigation by health officials in Guangdong province, home to the university where the scientist was based, China’s official Xinhua news agency said.

Evidence that Dr He had broken unspecified laws would be passed to police following the investigation, the report added, without giving details. It said that he had forged ethical review papers in order to recruit volunteers for the procedure.

Dr He worked with at least one overseas scientist, who was not named, according to the report, and “deliberately evaded supervision, used techniques whose safety and effectiveness was questionable”, the investigators said.

Dr He said in November that he was “proud” of his experiment and that the twins’ genes were edited to give them an immunity to HIV.

A Chinese regulation issued in 2003 banned altered human embryos from being implanted for the purpose of reproduction, and says altered embryos cannot be developed for more than 14 days. But scientists say there is no clear punishment attached to the regulation.

Dr He did not respond to a request for comment, and his lawyers could not be reached for comment.

The gene-editing revelation was an embarrassment for Beijing, which has been investing heavily to improve the reputation of Chinese scientific research. Scientists said such practices could have unpredictable health consequences.

Since appearing at a conference in Hong Kong last year, Dr He has been held under constant surveillance on the premises of a university in the southern city of Shenzhen, according to two people with knowledge of the matter.

The unidentified twin girls had a single gene, named CCR5, altered to make them less susceptible to HIV infection when their embryos were just a day old - early enough to become incorporated in the germ line, meaning it can be passed to future generations.

Such far-reaching changes are widely prohibited, including, for example, by the Council of Europe’s 1997 Convention on Human Rights and Biomedicine. – Copyright The Financial Times Limited 2019