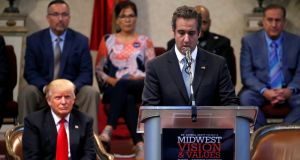 A second summit between US President Donald Trump and North Korean leader Kim Jong-un will take place near the end of February, the White House has announced.

Confirmation of the summit emerged after a 90-minute meeting between the US president and senior North Korean official Kim Yong Chol in the Oval Office on Friday. A location will be announced at a later date, the Trump administration said, amid reports that the second meeting between the two leaders may take place in Vietnam.

The visit to Washington by Kim Yong Chol, effectively the second in command in North Korea, was widely expected to lay the groundwork for a second summit between the two leaders. Following years of diplomatic tensions between the two countries, the US and North Korean leaders met at a historic summit in Singapore last June. However, there has been little evidence of progress since then in terms of North Korean moves to demilitarise.

As Mr Trump hosted the senior North Korean diplomat at the White House, controversy over the President’s apparent ties to Russia intensified on Friday. It followed a report overnight that Mr Trump instructed his lawyer Michael Cohen to lie to Congress about his business dealings in Russia.

Mr Cohen, who will begin a jail term next month, had already admitted to lying to Congress, originally claiming that negotiations about a Trump hotel in Moscow ended in January 2016 when they in fact continued during the election campaign that year.

We know that the President has engaged in a long pattern of obstruction. Directing a subordinate to lie to Congress is a federal crime. The @HouseJudiciary Committee’s job is to get to the bottom of it, and we will do that work.

But in a further development, Buzzfeed reported that Cohen told the Special Counsel investigating Russian interference in the election that his long-time boss had instructed him to lie. The news website, citing two law enforcement officials, also claimed that Mr Trump supported a plan devised by Cohen to visit Russia during the presidential campaign and meet President Putin.

Adam Schiff, the chair of the House Intelligence Committee said that his committee would secure additional witness testimony and documents following the reports. If true, the allegations “would constitute both the subornation of perjury as well as obstruction of justice”, he said.

Mr Trump, who repeatedly denied that he had any business dealings with Russia during the 2016 presidential campaign, responded to the report in a tweet on Friday, quoting an analyst on Fox News.

“Kevin Corke, @FoxNews “Don’t forget, Michael Cohen has already been convicted of perjury and fraud, and as recently as this week, the Wall Street Journal has suggested that he may have stolen tens of thousands of dollars. . .” Lying to reduce his jail time! Watch father-in-law!” he said, the latest reference by Mr Trump to Mr Cohen’s father-in-law with whom he was involved in business dealings.

Meanwhile Nancy Pelosi gave her first public comments since President Trump cancelled her trip to Afghanistan on Thursday after he denied a congressional delegation use of a military plane. Ms Pelosi accused the President of endangering her and others by disclosing details of the trip and of proposed plans to fly commercially.