Prince Philip ‘shocked and shaken’ but unhurt after car crash

The man who helped Britain's Prince Philip after his car flipped over following a crash with another vehicle, describes how he helped the 97-year-old escape the debris. Video: Reuters 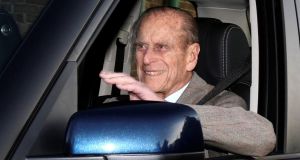 Prince Philip: the accident happened on the A149 at Sandringham just before 3pm on Thursday. File photograph: Neil Hall/Reuters

The Duke of Edinburgh was left “very shocked” and shaken following a car crash, but walked away unhurt after his vehicle reportedly overturned.

Philip, 97, was driving a Land Rover when the accident involving a Kia happened near the queen’s Sandringham Estate. According to witnesses, who contacted the BBC.

Philip’s Land Rover rolled over during the collision on Thursday afternoon. The witnesses helped the duke from his vehicle, the BBC reported, and its website quoted them as saying the queen’s consort was conscious but “very, very shocked” and shaken.

Norfolk police said officers were called to the A149 at Sandringham just before 3pm after a Land Rover and a Kia were involved in a collision. “The male driver of the Land Rover was uninjured. The female driver of the Kia suffered cuts while the female passenger sustained an arm injury, both requiring hospital treatment,” the force said. “We can confirm both casualties from the Kia have been treated at the Queen Elizabeth Hospital in King’s Lynn and have since been discharged.

“The road remained open and both vehicles were recovered a short time later.

“It is force policy to breath test drivers involved in collisions. We can confirm both drivers were breath tested and provided negative readings.”

The crash happened at the Babingley crossroads on a stretch of the A149 which runs between the town of King’s Lynn and the north Norfolk coast. It is single carriageway and has a 60mph speed limit. A Buckingham Palace spokeswoman confirmed the duke was driving when the accident happened. She added: “He saw a doctor as a precaution and the doctor confirmed he was not injured.”

It appeared to be quite serious, there was a lot of glass over the road as well as debris

The spokeswoman would not comment on suggestions Philip may have been travelling with a passenger, who is likely to have been his close protection officer.

Berneen Caney, 25, who witnessed the scene of the accident, said: “It appeared to be quite serious, there was a lot of glass over the road as well as debris. I saw one of the cars was quite badly damaged – as for the Range Rover, its windows were smashed.” The support worker from King’s Lynn added: “By the time I passed by, the Range Rover had been tipped back up on its wheels.

“I didn’t see that much as I was more concerned the car in front of me was braking to turn off and that there was glass and debris all over the road. “There was a lot of people there including police, and there was a paramedic there too.”

Philip and the queen, who has been informed about the accident, are staying at Sandringham, their residence during their traditional winter break. The duke, who retired from public duties in the summer of 2017 and last April had a hip replacement operation, is known to remain active. He was photographed in the summer driving a carriage, although he has given up competing competitively with the horse-drawn transport. But with the queen’s consort in his 98th year there may be calls from some for the duke to give up driving. Edmund King, AA president, said: “Young, predominantly male, drivers are much more likely to crash within six months of passing their test than older drivers within six months of hanging up their keys.

“Older drivers often self-restrict their driving by not driving at night and only driving on familiar roads.

“The decision to hang up your keys is a tough one but should be based on personal advice from your GP and family, rather than being based on some arbitrary age.”