How did the tiny country cope after losing its most famous tourist attraction? 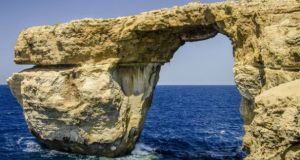 The Azure Window, one of Malta’s most visited locations, before it collapsed. 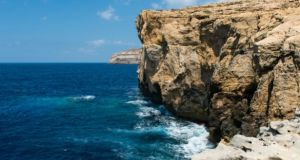 The site of the Azure Window in Gozo after it fell into the sea.

Imagine if the Cliffs of Moher fell into the sea and all that was left was the car park. Something comparable happened in Malta this day last year when its iconic sea arch, the 28 metre Azure Window, collapsed into the Mediterranean.

Malta is a tiny country, located about 80km south of Italy, consisting of the islands of Malta, Comina and Gozo. It was Gozo that boasted one of the Mediterranean’s most spectacular natural structures – until it didn’t.

Geologists had warned for a few years about the threat of erosion to the arch and it finally collapsed when rough seas lashed the country during a storm on March 8th, 2017. “We had this feeling that it was going to happen but we never expected it to happen in our lifetime,” says Gozo Tourism Association chief executive Joe Muscat.

The prime minister at the time said the collapse was “heartbreaking”. So how, one year on, has the country coped with the loss of its most famous landmark?

“The locality is not only known for the Azure Window,” says Muscat who, you suspect, has fielded questions on this subject more than once in the past 12 months. There is also, he insists, the Fungus Rock, the Blue Hole and the Inland Sea.

But the Azure Window was the big ticket item. More than a million people visit Gozo each year and 80 per cent of them visited the window. Even now, the spot where the window used to stand remains a big draw, although the reviews on Google have become more mixed: “Does not exist anymore,” reads one single-star assessment.

“It was a tragic loss,” says Muscat. “When you walk down the hill and you don’t see the arch any more it makes an impact.”

But is he concerned about the island’s future? No, he says. “Gozo has got the characteristics, the diversity and the authenticity in itself and these are the strongest marketing tools.”

According to Muscat, Gozo enjoyed a 12 per cent increase in tourists last year; the number of day and overnight visitors clocked in at about 1.2 million. Funnily, the empty former site of the Azure Window became a “must” for domestic tourists over the past 12 months.

As well as that, scuba divers have started poking around the now submerged boulders that made up the sea arch. “They are becoming an underwater attraction,” says Muscat.