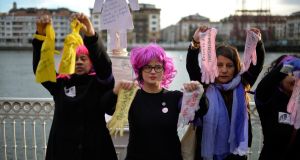 Protesters hold up gloves while taking part in a strike for women’s rights in Portugalete, Spain, on International Women’s Day. Photograph: Reuters

Women in Spain will abandon their paid and unpaid work on Thursday to participate in the country’s first nationwide “feminist strike”, which aims to highlight sexual discrimination, domestic violence and the wage gap.

The walkout, which coincides with International Women’s Day, is being supported by some of the country’s most high-profile female politicians, including Manuela Carmena and Ada Colau, the mayors of Madrid and Barcelona respectively.

Coordinated by an umbrella group, the 8 March Commission, the strike is designed to highlight social and economic disparities between men and women and put an end to Spain’s enduring machista culture.

“Today we call for a society free of sexist oppression, exploitation and violence,” the commission says in its manifesto. “We call for rebellion and a struggle against the alliance of the patriarchy and capitalism that wants us to be obedient, submissive and quiet. We do not accept worse working conditions, nor being paid less than men for the same work. That is why we are calling a work strike.”

Madrid city council will bathe its headquarters in purple light on Thursday to mark International Women’s Day and to show “its commitment to the struggle for women’s rights and equality”. MsCarmena has thrown her weight behind the event, tweeting: “On 8 March my agenda is a women’s agenda. The feminist strike has my full support.”

Ms Colau, who has been mayor of Barcelona since 2015, said she was joining the strike “to show that without women the world really does stop”.

The century of women

She said: “As people in public positions, we have the duty to mobilise on behalf of those who can’t go on strike. This is the century of women and of feminism; we’ve raised our voices and we won’t stop. No more violence, discrimination or pay gap!”

Complete annual figures for last year are not yet available, but by the end of September a total of 125,769 reports had been logged.

A European commission report last year said the pay gap between men and women in Spain had fallen from 18.1 per cent in 2007 to 14.9 per cent in 2015, while a recent Spanish study found that women on average were paid 12.7 per cent less for doing the same job as male colleagues.

The strike is also intended to show how much domestic and care work women do on a daily basis by urging them to leave the tasks to men.

“We’re giving visibility to work that no one wants to recognise, whether it’s at home or badly paid or done in the invisible economy,” said the organisers. “We call for this work to be recognised as a first-class social benefit and we demand that these kind of tasks be redistributed.”

A poll for El Pais this week found that 82 per cent of Spaniards thought there were valid motives for the strike. Some remain devoutly sceptical, however.

On Monday the bishop of San Sebastian, Jose Ignacio Munilla, said Christianity was opposed to “radical feminism” because it had made victims of women and “the true feminine cause”.

He said: “Feminism, having adopted a gender-based ideology, has somehow committed a kind of hara-kiri.” – Guardian Service