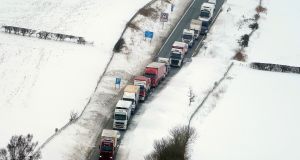 Cars and lorries stuck on A1 between Morpeth and Alnwick as the severe weather conditions continue. Photograph: PA

Snowstorms forced Britain to call in the army to help battle some of the worst weather seen for nearly 30 years.

After a blast of Siberian cold dubbed “the beast from the east”, southern Britain was battered by Storm Emma that arrived from the south and blocked roads, grounded planes and stopped trains.

Devon and Cornwall Police said a seven-year-old girl was fatally injured when a car hit a house in Bodrigan Road in Looe at about 2.30pm. A 75-year-old woman was earlier found dead in a snow-covered street in Leeds, while Hampshire Police said a 46-year-old man died after a collision involving a lorry and van on the A34 southbound near Tot Hill services.

A 60-year-old man who died after being pulled from the water at Danson Park, near Welling, south-east London, on Wednesday, was named by the Metropolitan Police as Stephen Cavanagh.

Dozens of passengers were stranded on trains overnight in southern England. And the army was summoned to help rescue hundreds of drivers stuck in the snow and to transport National Health Service workers. Roads and schools were closed and many flights cancelled across Britain.

Weather conditions in Scotland, which initially bore the brunt of the Siberian cold front, improved slightly, but the authorities warned people not to travel on Friday and during the weekend.

Around 30 vehicles were stuck on a road near Aberdeen, the local council said, with many other roads closed due to snow drifts. Residents of the Scottish border area were asked to help dig out roads where a number of motorists were stranded. Care workers in rural areas were moving around in tractors.

“In the current bad weather, I want to say thank you to everyone going the extra mile to keep our country moving - and to keep us safe,” British Prime Minister Theresa May said.

Audit firm PwC estimated that the cost of insurance claims by consumers and businesses in Britain to date as a result of the severe weather was at least Stg£15 million, though it was too early to forecast the final bill.

“We have already had over 8,000 road accidents in the past three days and this could increase significantly with more snow set to fall today,” said Mohammad Khan, head of PwC’s general insurance business in Britain.

Across Europe, the extreme weather has caused more than 50 fatalities. In Poland 21 people died, seven people have died since Sunday in Slovakia, and six have died in the Czech Republic. There were five people reported dead in Lithuania, four in France, three in Spain , two each in Serbia, Italy, Slovenia and Romania and one in the Netherlands.

Snow and icy conditions continued to cause disruption in southern Europe too. In the Liguria and Emilia-Romagna regions of northern Italy, the weather forced the closure of key sections of major highways and paralysed rail traffic.

Train services between major cities such as Genoa and Milan and Genoa and Turin, the three points in Italy’s north known as the industrial triangle, was either suspended or suffered from long delays because of ice.

Traffic on secondary, regional roads was backed up after vehicles were diverted onto them from closed highways.

The severe weather across Europe also triggered a warning from the World Health Organisation (WHO).

Dr Zsuzsanna Jakab, WHO regional director for Europe said low temperatures can be harmful to people’s health in many ways.

“It can aggravate existing conditions and raise the risk of increased blood pressure, heart attacks and strokes. Taking preventive action can help reduce the health impacts and risks,” he said.

“WHO is carefully following the situation in countries of the European Region. Affected countries should stay alert. Measures must be taken to protect people at risk.”

Cold weather increases the risk of cardiovascular and respiratory disease.

“Anyone can be affected by cold temperatures at home, at work, while commuting or during leisure activities. Those most at risk of cold-related illness include elderly people, children, and people who have chronic diseases or physical or mental limitations. People taking certain medications or those who are malnourished are also at greater risk of cold-related illnesses,” Dr Jakab said.

He said poor households are the hardest hit as the poor can least afford to adequately heat their homes.

“Homeless people, and refugees and migrants can be especially vulnerable.” The adverse health effects of cold weather are largely preventable.