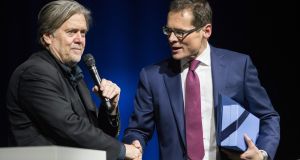 Former White House strategist Steve Bannon shakes hands with the editor of Swiss weekly Weltwoche (World week), Roger Koeppel during an event in Zurich. Asked about his relationship with Trump, Bannon was gushing: “I love the guy and he’s done a great job.” Photograph: EPA

The former chief strategist of US president Donald Trump, who was forced out of the White House just seven months into Trump’s presidential term, arrived in Zurich from Rome, after witnessing the outcome of the Italian general election.

“Once again an anti-establishment vote and once again the media is completely gobsmacked. They looked at France and thought this populist surge was over. It’s not over, it’s just beginning,” Bannon told the audience of 1,400 on Tuesday night.

Bannon jumped from country to country in his analysis of the “symbiosis” happening in the right-wing movement, namechecking Poland, Czech Republic and Germany, and heaping praise on the Hungarian prime minister Viktor Orban, whom he likened to Trump, calling him “a great patriot and a great hero”.

The Zurich event, Bannon’s first in Europe since Trump’s election, was organised by the Swiss right-wing magazine, Die Weltwoche, and attended by an enthusiastic crowd. Outside, amid a heavy police presence, a group of some 100 protesters held up anti-Trump and anti-racism banners a short distance from the venue.

The new concert venue in Zurich’s District 11 is a more likely place to see a former boy band performer rather than a former political heavyweight forge a new solo career. Since Bannon’s White House resignation and his January ousting from his pet project, the alt-right network Breitbart News, he now has time to try out a new role as godfather of the European right.

Bannon indulged himself at the beginning of his speech by reminiscing about the Brexit vote, which he claimed would never have happened without Breitbart London, and Trump’s presidential victory, walking the audience through an hour-by-hour retelling of how the results came in on both nights.

In true Trumpian style, he then called for the lights to be turned on in an effort to locate the press seats. No-one responded when he asked, “Is the opposition party media here tonight?”

The grey vote was well represented in the frequently clapping audience but otherwise the crowd looked like a cross section of the kind of people you would see in a city’s central business district at lunchtime, minus the young women working in lower paid roles. A solitary Make America Great Again cap provided a pinprick of red in the hall.

When Bannon began outlining his vision of the impending financial crisis and revolutionary turmoil to come, the enthusiasm waned. The Swiss audience enjoyed hearing they were a beacon to the world by rejecting the EU but were less keen to imagine a violent clash between political movements in the near future.

Even Bannon’s effusive host, editor-in-chief of Die Weltwoche and Swiss People’s Party parliamentarian Roger Köppel, who was revelling in the reflected attention, showed his discomfort. “We like stability,” Köppel said and asked Bannon what he had to say to people who feared the consequences of popular unrest.

Asked about his relationship with Trump, Bannon was gushing. 'He can call me anything but late for supper. I love the guy and he’s done a great job'

Referring to Switzerland’s role as a cryptocurrency hub, Bannon said cryptocurrencies used as a means to stop central banks from “debasing currencies” would be one of the main driving forces of “the populist nationalist movement”. “Once you have control of your data, citizenship and currency, that’s when you’ll have true freedom.”

Asked about his relationship with Trump, Bannon was gushing. “He can call me anything but late for supper. I love the guy and he’s done a great job.” He described himself as being on listening terms rather than talking terms with the US president and joked their lawyers talked to each other.

On Tuesday night, Bannon recalled the three main policy points of Trump’s platform developed by him – curb immigration, protect US trade and jobs, and stop underwriting global security. He said his message to Trump had always been, “you will win if you stick to the plan”.