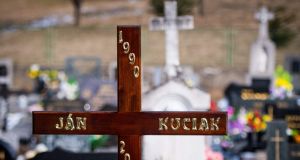 A cross stands on the grave of murdered journalist Jan Kuciak – who was slain as he was about to publish an explosive report on alleged high-level corruption linked to the Italian mafia – prior to his funeral at a cemetery in Stiavnik, Slovakia, last Saturday. Photograph: Vladimir Simicek/AFP/Getty Images

Slovakia is slipping deeper into political crisis amid worsening relations between populist prime minister Robert Fico and president Andrej Kiska over the government’s handling of the murder of an investigative journalist.

Jan Kuciak (27) and his girlfriend Martina Kusnirova were found shot dead at his house on February 24th. He had been looking into alleged links between Slovak political figures and Italian businessmen with connections to the Italian ‘Ndrangheta mafia group.

About 20,000 people marched in towns and cities across Slovakia on Friday to demand justice for the slain couple and an end to corruption, and Mr Kiska urged Mr Fico to call snap elections or radically overhaul his government.

Mr Fico refused and accused Mr Kiska, opposition parties and his critics in the media of wanting to “dance on the graves” of the murdered pair.

On Monday, Mr Fico suggested Mr Kiska was somehow working in cahoots with billionaire Hungarian-American philanthropist George Soros, who is a bogeyman for populist and rightwing leaders across the world – from US president Donald Trump to Russia’s Vladimir Putin and Hungary’s Viktor Orban.

“Should we have any problems, we will solve them on our own, and by no means do we need a president who suddenly talks about a substantial reconstruction of the government ...or [speaks] about early elections,” Mr Fico said, while offering crisis talks to his Smer party’s coalition partners.

“I want to ask the president a simple question today at this press conference. On September 20th, 2017, New York, Fifth Avenue, I wonder why the head of state of the Slovak Republic went to a private meeting with a man who has a very dubious reputation, and that man is called Mr Soros,” Mr Fico said.

“I really wonder why no foreign ministry official took part in this meeting,” Mr Fico added, while claiming that the pressure on his government after the double murder suggested “an attempt at total de-stabilisation” inspired by an outside force.

“The prime minister is ignoring the fact that his government is falling apart,” said Mr Kiska’s spokesman Roman Krpelan, noting that long-serving culture minister Marek Madaric resigned last week and smaller parties in the ruling coalition are reconsidering their alliance with Smer.

“Causing distractions with conspiracy theories does not free the prime minister from the obligation to solve the deep political crisis or make way for someone who can. President Andrej Kiska will begin talks with representatives of parliamentary parties on Wednesday.”

Mr Kuciak’s final article, published after his murder, showed that an adviser to Mr Fico and a party ally who was the secretary of Slovakia’s security council had business links to a suspected member of the Calabria-based ‘Ndrangheta group. They both resigned from their posts last week but deny any connection to the murders.

Police detained seven Italians in eastern Slovakia for questioning late last week but all have now been released, increasing pressure on controversial interior minister Robert Kalinak – a close ally of Mr Fico – to deliver results in the investigation soon.