Britain's foreign secretary, Boris Johnson, has said that the UK government is prepared to respond "robustly" should evidence emerge that the Russian government were involved in attacking Sergei Skripal in Salisbury. Video: UK Parliament TV 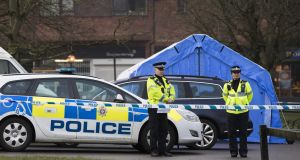 British counter-terrorism police have taken over the investigation into the suspected poisoning of a former Russian double agent and his daughter, as Boris Johnson promised a “robust” response if the Russian state was responsible.

Samples from the scene at a Wiltshire shopping centre where Sergei Skripal and his daughter Yulia were found unconscious on Sunday were tested on Tuesday at the military research laboratory at Porton Down.

Kier Pritchard, the temporary chief constable of Wiltshire police, said that, although counter-terrorism officers were now leading the inquiry, the nature of the incident under investigation had yet to be determined.

“Our focus has been on what has caused these people to become critically ill and whether or not criminal activity has taken place,” he said.

“The counter-terrorism network will be leading this investigation as it has the specialist capability to do so. It is important to reiterate that they have not declared this as a terrorist incident. At this stage they are keeping an open mind as to what has happened.”

Mr Skripal and his daughter, who were found slumped on a bench outside a shopping centre in Salisbury on Sunday afternoon, remained in a critical condition in intensive care on Tuesday night.

Mr Skripal, a former Russian intelligence officer who was convicted of spying for MI6, moved to Britain after he was released in 2010 as part of a spy swap. Mr Johnson, the foreign secretary, told the House of Commons on Tuesday that the incident had echoes of the death by polonium poisoning of Alexander Litvinenko in London in 2006, which a public inquiry found to be the work of Russian intelligence.

“Although it would be wrong to prejudge the investigation, I can reassure the House that, should evidence emerge that implies state responsibility, Her Majesty’s government will respond appropriately and robustly,” he said.

“It is too early to speculate about the precise nature of the crime or attempted crime that took place in Salisbury on Sunday, but members will have their suspicions. If those suspicions prove to be well founded, this government will take whatever measures we deem necessary to protect the lives of the people in this country, our values and our freedoms.

“Though I am not now pointing fingers, because we cannot do so, I say to governments around the world that no attempt to take innocent life on UK soil will go either unsanctioned or unpunished,” he said.

Mr Johnson said that if it emerged that Russia was responsible, “it would be very difficult to imagine” that British representation at this summer’s World Cup football championship in Russia could go ahead in the normal way. The foreign secretary’s office said later that he was referring to British dignitaries and officials rather than suggesting that the England team would boycott the championship.

Opposition MPs accused the government of a weak response to the Litvinenko killing and to other suspicious deaths of Russians in Britain. A number of MPs cited a report by BuzzFeed’s Heidi Blake, which attributes 14 deaths in Britain since 2012 to Russian elements. Labour’s Yvette Cooper called for a review of all 14 cases.

“In many of those cases, UK authorities concluded that the deaths were suicides, despite the fact that there has now been considerable reported evidence, including in the BuzzFeed report, casting serious doubt on those conclusions. There are also claims that US intelligence may have provided further evidence to the contrary in those 14 individual cases, and there are serious questions about whether the police investigations were thorough enough,” she said.