Tens of thousands rally against Madrid’s conciliatory stance on Catalonia

About 45,000 take to the streets of Spain’s capital ahead of trial of separatist leaders 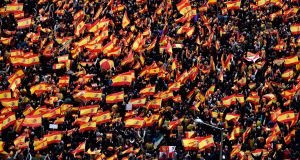 Tens of thousands of people gathered in Madrid on Sunday to protest against the government’s handling of the Catalan question, as Spain braced itself for the landmark trial of 12 separatist leaders this week. About 45,000 people joined the rally in Colón square to vent their fury at what they see as the overly conciliatory stance adopted by prime minister Pedro Sánchez on the issue, and to demand a snap general election.

The demonstration was called by the conservative People’s Party and the centre-right Citizens party, and backed by the far-right Vox party. It also attracted supporters of small-scale fascist and extreme-right groups.

The protest came two days before the beginning of the trial of Catalan separatist leaders behind the failed bid for regional independence – an event that provoked Spain’s worst political crisis since it returned to democracy after the death of Franco.

The public proceedings at Spain’s supreme court, which are expected to last three months and will be broadcast on television, will focus on the independence referendum held in October 2017 and the Catalan parliament’s subsequent unilateral declaration of independence.

Nine of the defendants – who include former Catalan vice-president Oriol Junqueras, former speaker of the Catalan parliament Carme Forcadell and two influential grassroots activists, Jordi Cuixart and Jordi Sànchez – are accused of rebellion, which carries a prison sentence of up to 25 years. Other charges include sedition and misuse of public funds.

At the heart of the case will be the decision by the then Catalan government to hold the referendum despite repeated warnings that it would violate the constitution, which stresses the “indissoluble unity of the Spanish nation”.

Although Catalan pro-independence parties have never managed to win 50 per cent of the vote in the regional parliament, and although polls consistently show Catalonia is roughly evenly split over the independence issue, the government of the then Catalan president, Carles Puigdemont, chose to press ahead with the vote.

In early September 2017, pro-independence parties managed to get a law paving the way for the referendum passed in the regional parliament, despite furious objections from opposition MPs who complained that usual procedures had been disregarded.

Three weeks later, on October 1st, the Catalan government held the referendum, which was marred by violence from Spanish police officers, who raided polling stations, charged crowds with batons and fired rubber bullets as they tried to stop the vote.

According to the Catalan government, about 2.3 million of Catalonia’s 5.3 million registered voters – 43 per cent – took part in the referendum, and about 90 per cent of participants backed independence.

The vote was largely boycotted by unionist Catalans. On October 27th, shortly after secessionist Catalan MPs voted to declare independence, the Spanish government of the then prime minister, Mariano Rajoy, won senate backing to sack Puigdemont and his cabinet and assume direct control of Catalonia.

Days later, Mr Puigdemont fled into exile in Belgium, while Junqueras and seven other former Catalan ministers were remanded in custody.

The president of Spain’s supreme court, Carlos Lesmes, has described the imminent proceedings as “the most important trial that we’ve held since democracy [returned]”.

Hundreds of witnesses are to be called, among them Mr Rajoy, his former deputy prime minister Soraya Sáenz de Santamaría, the mayor of Barcelona, Ada Colau, former Catalan president Artur Mas, and the current speaker of the Catalan parliament, Roger Torrent. The court has ruled that Mr Puigdemont himself will not be allowed to testify via videolink from Belgium.

Other witnesses will include some of the Catalan voters and Spanish police officers injured on the day of the referendum.

Both the Spanish and Catalan governments are acutely aware of the publicity and scrutiny the trial will bring.

Catalan independence leaders are keen for their day in court as a means to mobilise their grassroots supporters after months of inertia and amid growing fractures within the movement. They have repeatedly sought to accuse the Spanish justice system of institutional bias and to claim that the accused are being punished for defending the right to self-determination.

In a recent interview, Mr Puigdemont told the Associated Press that the trial would be “not an act of justice but rather one of vengeance”, while his handpicked successor, Quim Torra, has argued that “no crime has been committed”.

Sánchez’s socialist government has been embarking on its own PR campaign to counter the claims of the pro-independence faction.

The prime minister has consistently argued that a clear separation of powers exists in Spain and that the judiciary is wholly independent of the government.

Ahead of the trial the prime minister visited the European Court of Human Rights in Strasbourg last Thursday to stress Spain’s commitment to the rule of law. The Sánchez administration has pointed to a series of high-profile court cases as further evidence of a fully functioning and impartial legal system.

In February 2017 former deputy prime minister Rodrigo Rato was sentenced to 4½ years in prison for misusing corporate credit cards while in charge of two leading Spanish banks at the height of the country’s financial crisis.

Meanwhile, the brother-in-law of King Felipe is serving a six-year prison sentence after being found guilty of charges including embezzlement, fraud and tax evasion. The king’s sister, Princess Cristina, was cleared of helping her husband evade taxes at the end of the same trial two years ago.

But by far the most dramatic court case of recent years was the so-called Gürtel trial. In May last year, Spain’s highest criminal court ruled that the People’s Party, which was then in government, had profited from an illegal kickbacks-for-contracts scheme.

The judges expressed doubts over the credibility of the testimony offered by Mr Rajoy the previous July, when he became the first serving Spanish prime minister to give evidence in a criminal trial. The Gürtel verdict prompted Mr Sánchez to bring a motion of no-confidence against Mr Rajoy and his government.

The vote that removed Mr Rajoy from office and installed Mr Sánchez’s socialists as a minority government was successful only because it won the backing of the Basque Nationalist Party – and the Catalan pro-independence parties of Puigdemont and Junqueras. – Guardian