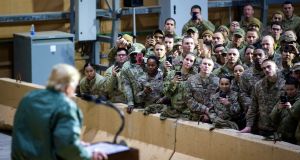 US resident Donald Trump at a rally at Al-Asad Airbase in Iraq in December. Photograph: Al Drago/New York Times

US president Donald Trump’s declarations on the future of US forces in Syria and Iraq could jeopardise the ongoing campaign against Islamic State remnants in both countries.

While reaffirming his intention to withdraw US troops from Syria, he announced he would retain and expand the US military presence in Iraq to “watch Iran”. This is rejected by Iraq’s entire political establishment, which strives to maintain a delicate balance between regional rivals Washington and Tehran, Baghdad’s chief allies.

Iraq’s senior Shia cleric, Grand Ayatollah Ali Sistani, is the latest influential figure to add his voice to the chorus of protest. He said Iraq rejected being “a launching pad for harming any other country” and sought to have “good and balanced relations [with neighbours] based on mutual interests and without intervention in [others’] internal affairs”.

Revered by Shias and respected by Sunnis and secularists, Sistani has made rare but strategic interventions in Iraq’s political affairs, castigating corruption, mismanagement and sectarianism.

Recalling a December visit to Ain al-Asad airbase in Iraq, Trump stated, “We spent a fortune on building this incredible base. We might as well keep it. And one of the reasons I want to keep it is because I want to be looking a little bit at Iran because Iran is a real problem.”

Al-Asad is an Iraqi facility used by the US, which has no permanent bases in the country. Washington’s 5,200 troops depend on Iraqi approval.

Trump angered Baghdad when he visited al-Asad base because he did not arrange to meet Iraqi officials, suggesting he believes the US does not have to take them into account when adopting policies affecting their country.

His declaration of intent could complicate negotiations for deployment in Iraq of some of the 2,200 US troops due to leave Syria. Additional troops could mark a major change in the US mission from training and advising Iraqi forces fighting Islamic State remnants to monitoring and, perhaps, exerting pressure on Iran.

The New York Times has reported a visit by a US colonel seeking to deploy US troops at three Iraqi bases near the Iranian frontier.

Iraqi president Barham Salih, a pro-US Kurd, was first to criticise Trump’s latest statements. Salih said he did not request permission to surveil Iran from Iraqi territory and pointed out that the Iraqi constitution, drawn up during the US occupation, prohibits the use of bases in Iraq to threaten the interests or security of neighbouring countries.

Iraqi prime minister Adel Abdul-Mahdi, an independent, called on Trump to retract his declaration. The pro-Iranian speaker of parliament, Mohammed al-Halbousi, said the assembly would review the 2008 strategic framework agreement that regulates the US military presence in Iraq and mandated US withdrawal in 2011. US troops returned in 2014, with Iraq’s permission, to battle Islamic State, also known as Isis.

Shia cleric Muqtada al-Sadr, an Iraq nationalist whose party is largest in parliament, and pro-Iranian groups have called for the expulsion of US forces. Iraq’s Hizbullah faction (not related to Lebanon’s Hizbullah) warned US troops could be liable to attack if they remain.

Baghdad’s balancing act is already under challenge due to Trump’s reimposition of sanctions following renunciation of the 2015 agreement for dismantling Iran’s nuclear programme in exchange for sanctions relief. The US has so far granted waivers permitting Iraq to buy Iranian natural gas and electricity, but the arrangement is due to expire in March.

If power cuts result, Iraqis could take to the streets in revolt against the government as they did last summer. Iraq depends on food, agricultural products, air conditioners and vehicle spare parts from Iran, and revenue from millions of Iranian pilgrims who visit the holy cities of Najaf and Karbala.