Pompeo to visit Hungary and Slovakia, and join Pence in Poland 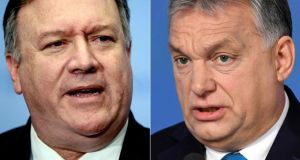 US Secretary of State Mike Pompeo intends to raise concerns over the national and regional presence of Huawei in talks with Hungarian prime minister Viktor Orbán. Photographs: AFP/Getty Images

Top US officials will visit central Europe this week to discuss closer co-operation on issues ranging from energy to defence, and to shore up alliances in the face of perceived threats from China and Russia.

Secretary of state Mike Pompeo is due to hold talks in Hungary on Monday before heading north to Slovakia and Poland, where he will join US vice-president Mike Pence in Warsaw on Wednesday for a conference on Middle East security.

The nationalist, anti-immigration governments of Hungary and Poland regard their visits as a vote of confidence from the White House and a rebuff to European Union criticism of their alleged attacks on democracy and the rule of law.

In talks with Hungarian prime minister Viktor Orbán, Mr Pompeo intends to raise concerns over the strong national and regional presence of Huawei, a huge Chinese technology firm that the US and several allies regard as a security threat.

“In Hungary, the secretary will give particular focus to the role of China in central Europe, and express our concerns about the growing presence of Huawei in Hungary,” a senior US official told reporters in Washington.

Mr Pompeo will “urge regional leaders to heed the warnings of countries from Asia-Pacific who have found themselves in difficult straits as a result of working too closely with the Chinese,” the unnamed official said.

The US recently filed 23 charges against Huawei and is seeking the extradition from Canada of Meng Wanzhou, the firm’s chief financial officer and the daughter of its founder, for allegedly conspiring to violate sanctions on Iran. Both the company and Ms Wanzhou deny wrongdoing.

Australia and New Zealand have banned Huawei from providing 5G internet equipment, and last month Poland arrested a Huawei employee for alleged spying and the Czech Republic cited security concerns in barring the firm from a tender to build a new online national tax portal.

Yet Slovakia and Hungary say they have no fears about Huawei, which has established a European operations and maintenance centre in Hungary and invested about €1 billion there since 2005, as Mr Orbán courts Chinese investment amid strained ties with the EU.

Reuters quoted the US official as saying China saw in central Europe “relatively small countries with a recent history of communism, with significant pathways of corruption, that lend themselves more readily to state penetration in key sectors, and then they have a springboard to operate within EU fora”.

Mr Orbán maintains good relations with Russian president Vladimir Putin, criticises EU sanctions on Russia and signed a €10 billion deal with Moscow to upgrade Hungary’s only nuclear power plant, in a contract that has been made a state secret.

Mr Pompeo is also expected to meet civil society groups in Hungary, which faces EU legal action over its policies on asylum, NGOs and reforms that have forced the George Soros-funded Central European University to move most programmes to Vienna.