Sutherland never quite got recognition at home he deserved 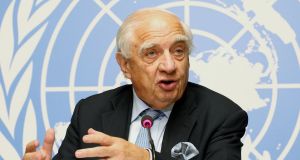 Peter Sutherland’s final public role was as adviser to the pope and the UN general secretary promoting a generous and open approach to migrants. Photograph: Magali Girardin/EPA

As the “father of globalisation” Peter Sutherland was probably the most influential Irish person in the world over the past few decades but never quite got the recognition at home that his achievements deserved.

One reason for this may be the hostility of those opposed to his fundamental worldview, which favoured individual freedom, free trade and international institutions like the European Union over nationalism and rigid state control of the economy.

Another is probably the fact that Sutherland became a very wealthy man due to his talents. His tendency to express his views in a forthright manner that made little concession to those who disagreed with him did not endear him to many.

Yet it was those very qualities that made him such a commanding figure. As a young attorney general he had the courage to tell taoiseach Garret FitzGerald and his government colleagues that the wording of the Eighth Amendment to the Constitution on abortion was faulty.

Sutherland plunged the Fine Gael party into a deeply divisive controversy in 1983. While a large majority of his own party’s TDs backed his stance it did not secure a majority in the Dail and the original Fianna Fáil wording was eventually accepted. The consequence of that decision remain with us today.

It was not that Sutherland actually favoured abortion. He remained a loyal Catholic all his life and attributed his commitment to public service to his Jesuit education. His final public role was as adviser to the Pope and the United Nations general secretary promoting a generous and open approach to migrants.

His most profound impact on the world was undoubtedly the role he played in the creation of the global economy we know today. Appointed European commissioner in 1984 he quickly established himself, with the backing of his boss Jacques Delors, as the dominant figure in the Commission and proceeded to open up the European economy to competition.

After that he was the natural choice to head the world trade body GATT which he transformed into the much more dynamic World Trade Organisation (WTO). It was his performance as head of the WTO which prompted the chief US negotiator Mickey Kantor to dub him “the father of globalisation.”

While the far right and the far left have come together to blame globalisation for the ills of the world, just as they denounced liberal democracy in the 1930s, there is overwhelming evidence of the benefits that free trade has brought to the majority of people on the planet.

Looked at from a purely selfish national standpoint, globalisation has been crucial in transforming this country over the past two decades from a struggling backwater into one of the best places in the world to live.

More importantly, globalisation has lifted billions of people out of abject poverty across the planet, particularly on the continent of Asia.

That is not to say there isn’t a downside. While globalisation has benefited a majority of the world’s population it has also created losers, the most obvious being the traditional working class in developed economies. Not nearly enough has been done to recognise and address their problems.

The power of a handful of multinational companies to dominate world markets and avoid tax has been another consequence of globalisation that needs to be tackled urgently.

Sutherland may have been a bit naive in expecting those who struggle with the impact of globalisation to be as open minded as privileged people like himself about the migration of vast numbers of people into Europe. However, he was motivated by a fundamental belief that good politics has a moral purpose.

Sutherland’s highly profitable foray into banking also generated suspicions about his motives but the great financial crisis of 2008 was caused by flawed policies in the United States and the European Union rather than globalisation.

During the crisis Sutherland gave every possible assistance to the Irish government and minister for finance Brian Lenihan and used his extensive international connections to argue Ireland’s case. He supported Lenihan in countering the array of forces who urged default on the national debt and defiance of the European Central Bank. The correctness of that approach is now self-evident but it wasn’t so to most commentators in 2008.

An equally rational response is required to Brexit, the election of Donald Trump and the rise of anti-immigrant parties in continental Europe. All have been widely ascribed as a reaction to globalisation but so far nobody has proposed an alternative that does not involve a regression to closed borders and economic protectionism.

When the pros and cons are totted up the overwhelming evidence is that Sutherland was right on the benefits of globalisation. Jonathan Swift famously wrote: “Whoever could make two ears of corn, or two blades of grass, to grow upon a spot of ground where only one grew before, would deserve better of mankind, and do more essential service to his country, than the whole race of politicians put together.”

Peter Sutherland’s great achievement to help his fellow man towards that goal.