Mueller may seek to interview Trump in Russia inquiry 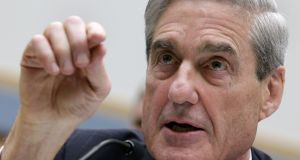 Special counsel Robert Mueller told president Donald Trump’s lawyers last month that he will probably seek to interview the president, setting off discussions among Mr Trump’s lawyers about the perils of such a move, two people familiar with the discussion said Monday.

No formal request has been made and no date has been set. White House officials viewed the discussion as a sign that Mr Mueller’s investigation of Mr Trump could be nearing the end. But even if that is so, allowing prosecutors to interview a sitting president who has a history of hyperbolic or baseless assertions carries legal risk for him. Mr Mueller has already brought charges against four of Mr Trump’s former aides. All face accusations of lying to authorities.

Mr Trump’s lawyers have long expected that Mr Mueller would eventually ask to speak with the president. Ty Cobb, the senior White House lawyer on the case, has for months pledged full cooperation, saying Mr Trump has nothing to hide in an investigation into whether his campaign worked with Russian operatives to try to influence the 2016 presidential election.

Mr Trump’s lawyers are expected to try to set ground rules for any interview or provide answers to written questions. If Mr Trump were to refuse outright to cooperate, Mr Mueller could respond with a grand jury subpoena.

The White House had no comment on the discussions about a possible interview, which were first reported by NBC News. One person familiar with the discussions said Mr Mueller appeared most interested in asking questions about former national security adviser Michael Flynn and the firing of FBI director James Comey not the broader question of possible collusion with Russia. Those topics signal an interest in whether Mr Trump tried to obstruct justice. The person was not authorised to talk about internal discussions and spoke on condition of anonymity.

Mr Trump has sat for depositions before and shown discipline when under oath. His testimony in civil cases reveals a canny ability to avoid being cornered and a frank acknowledgment that he uses “truthful hyperbole” or “innocent exaggeration.” But he has never faced questioning from someone like Mr Mueller, a veteran prosecutor and former FBI director who has a dozen experienced litigators behind him. –NYT