South Korea welcomes dialogue with North but no easing of sanctions 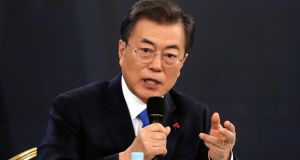 South Korean president Moon Jae-in: “I am giving a lot of credit to President Trump . . . I am expressing my gratitude,” he said, of the US president’s role in the Korean talks. Photograph: Kim Hong-Ji /EPA

“We will work to help resolve the North Korean nuclear issue by seeking improvements in the South-North Korea relationship through dialogue but should the North stage an additional provocation, the international community will continue to put strong sanctions,” Mr Moon told a news conference in the presidential Blue House in Seoul.

“And our government too will have no choice but to push for both [dialogue and sanctions],” he said.

He was speaking one day after inter-Korean talks to discuss the North’s participation in the Winter Olympics, to be held in the South Korean city of Pyeongchang next month.

The talks in the “peace village” of Panmunjom at the demilitarised zone (DMZ) were the first between the two Koreas since 2015 and they opened the door to further dialogue, possibly including the North’s nuclear weapons programme.

North Korea said it would send a delegation to the games, including a team of taekwondo martial arts athletes, cheerleaders, journalists and officials.

A slanging match between North Korean leader Kim Jong-un and Mr Trump, and strong rhetoric from the US president about willingness to use force against the North, had jangled nerves in the region.

Some analysts feared that the bilateral talks between the two Koreas were an attempt by the North to drive a wedge between the South and the US. Mr Trump has claimed credit in a tweet for bringing about the talks, and Mr Moon underlined the strength of the relationship between Washington and Seoul, and thanked Mr Trump for his help.

“I am giving a lot of credit to President Trump . . . I am expressing my gratitude,” he said.

South Korea would work towards reopening the inter-Korean Kaesong industrial park and ending the prohibition of cross-border economic activities, but the nuclear issue needed to be resolved for this to happen.

“I will do my best to make this year a new start for peace on the Korean Peninsula. In the process, I will co-operate more closely with related countries, including our ally, the US, China and Japan, and the rest of the international community,” Mr Moon said.