The US by train: Hippos, racial injustice and gold prospecting

The lack of momentum – freights go first – allows you to notice things, good and bad 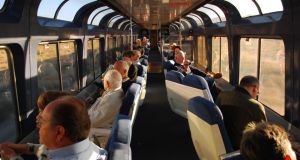 Train travel in the US is well worth doing – if you have the time and the patience. To get from New York to Austin, Texas, a journey of more than 2,700km, meant two nights of fitful sleep squashed in my chair.

The first stage was aboard the 49 Lake Shore Limited – which indeed it was in terms of momentum – leaving mid-afternoon from Penn Station through New York, under the Hudson River before emerging into daylight heading west to Chicago.

The sun set on the train tracing the picturesque waterways of America’s northeast. During the night a thunderstorm raged in the distance while the train slipped through small stations, each dimly lit like an Edward Hopper painting.

“What a dump,” the old gentleman beside me said next morning as the train entered rusting industrial wasteland on Chicago’s outskirts. In the distance the 110-story Sears tower soared into the blue sky, testifying to the great contradictions of poverty and wealth, growth and decay characterising the American endeavour.

“At least we didn’t hear gunshots,” the man said.

I changed to the impressive-looking double-decker Texas Eagle Superliner. What a name! But it proved equally slow, southwards through Illinois and into Missouri, passing St Louis’s 192m Gateway Arch beside the Mississippi River.

Next, Arkansas and the town of Little Rock, where in September 1957 nine black students enrolled at its formerly all-white Central High School, testing the landmark 1954 US supreme court ruling that banned segregation in public schools.

Then into the indomitable Lone Star State with Davy Crockett’s words on my mind: “You may all go to hell, and I will go to Texas!”

In defence of the Amtrak national rail network, its trains can shift but the even more enormous sluggish freight trains take priority, leaving passenger trains held at stations and on sidings for up to an hour.

There is an upside, however, to this lack of momentum. It allows you to notice things. Some good, such as the landscape and action: gangs of Harley Davidson bikers barrelling down highways, mustang horses running beside the train, a classic white convertible driven by an elder gent next to his blond paramour.

Some things not so good: the grizzled African-American military veteran unable to afford dinner in the dining car, resorting to a kids’ menu hot dog.

“When I left the army you couldn’t find a job if you were black. That’s why I’ve been in a band for the last 30 years,” Carl told me. “It’s not much better now.”

Another beleaguered night in my chair, another dawn – and new hope: “Come to the dining car, where the coffee is so fresh you may never be the same,” announced the train’s speaker system.

At the breakfast table I was joined by a septuagenarian amateur artist who elaborated on Australian impressionism as I tucked into my scrambled eggs, sausage and southern-style biscuit (think fluffy scone).

You can meet plenty of people, if you wish – Americans talk, given half a chance – such as the gold prospector returning home (yes, they’re still prospecting).

Increasingly I retreated to the second-floor viewing lounge to stretch my legs under the perspex bubble roof. As the train passed collections of wooden bungalows surrounded by the intimidating expanse of rural Texas, it was easier to understand those embracing the Second Amendment in order to have a shotgun close to hand.

In the afternoon a National Parks volunteer materialised to point out the town of McGregor, where Elon Musk’s SpaceX does its rocket testing, and a solitary house where they filmed The Texas Chainsaw Massacre.

Going through the town of Hutto, the volunteer had children counting how many hippo statues they could see next to banks and fast food outlets. In 1915 a circus train stopped there and a hippo escaped, resulting in the hurried and memorable telegram: “STOP TRAINS, HIPPO LOOSE IN HUTTO”.

The small town of Crawford beside the tracks was unknown until local-boy George W Bush became president. Afterwards Crawford became known as the western White House and a regular dateline in newspapers.

“Yeah!” shouted an African-American lady a couple of tables away from me.

Finally I emerged squinting into the late afternoon sunlight at Austin station, more unkempt than when I started, and decidedly tipsy. The beers and gin-and-tonics sold beneath the viewing lounge had proved too hard to resist – and they made the commentary even more interesting.

1 WHO warns of potential for ‘immediate second peak’ in Covid-19
2 Archaeologists are ‘quite sure’ they have found Red Hugh O’Donnell’s burial place
3 Coronavirus: No new Covid-19 deaths reported in State for first time since March
4 Tributes paid to Ireland’s deputy ambassador to China who died on Sunday
5 Unidentified man has been in Irish psychiatric hospital for 30 years
Real news has value SUBSCRIBE