California mudslides death toll hits 15, with over a dozen missing

At least 13 people have been killed in Southern California mudslides and that number is likely to increase as rescue workers comb through the debris, Santa Barbara County Sheriff Bill Brown told a news conference on Tuesday (10th January). 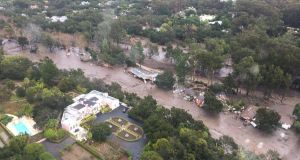 Rescue crews with dogs and thermal-imaging equipment searched the hills around wealthy Santa Barbara, California, on Wednesday for up to two dozen people missing after rain-driven mudslides swept through the coastal community, killing at least 15.

Mudslides damaged historic hotels and the homes of celebrities including Oprah Winfrey, who relish the area sandwiched between the ocean and the sprawling Los Padres National Forest, for its natural beauty and proximity to sprawling Los Angeles.

But the wooded hillsides that once gave their estates a sense of seclusion were largely denuded by last year’s historic wildfires, setting the stage for the massive slides that slammed into homes, turned highways into raging rivers and shredded cars into nearly unrecognisable tangles of metal after heavy Tuesday rains.

Between 12 and 24 people who were believed to be in the area at the time of the slides remained unaccounted for, said Chris Elms, a spokesman for state firefighters. About 500 law enforcement officers and firefighters were combing mud-covered neighbourhoods, using dogs, helicopters and thermal imaging equipment to locate missing people.

Officials have ordered residents in a large swath of Montecito to stay in their homes so that rescuers can better go about their work. About 300 people were stranded in a canyon.

Local rescue crews, using borrowed helicopters from the US Coast Guard, worked to airlift them out, officials said. The county initially ordered 7,000 residents to evacuate and urged another 23,000 to do so voluntarily, but only 10 to 15 per cent complied with mandatory orders, said Amber Anderson, a spokeswoman for the Santa Barbara County fire department.

The slides closed several historic hotels, including the Four Seasons Biltmore, which had just reopened on Monday after repairing damage from the wildfires. The courtyard of the 90-year-old Montecito Inn, built by silent movie actor Charlie Chaplin, was filled with a thick crust of debris driven by the slides. Some undamaged businesses closed as they lacked water, gas and other supplies to operate.

The mudslides followed a violent rainstorm that dropped as much as 15cm of precipitation in pockets northwest of Los Angeles, soaking ground that was left vulnerable after much of its vegetation burned in the state’s largest wildfire last month. Winfrey posted a video on Instagram showing her wading through nearly knee-deep mud on her Montecito property.

“The house in back is gone,” she could be heard saying as she inspected the damage. A 14-year-old girl was found alive on Tuesday after firefighters using rescue dogs heard cries for help from what was left of her Montecito home, the Los Angeles Times reported.

“I thought I was dead there for a minute,” the teenager Lauren Cantin, covered in mud, told NBC News after workers spent six hours rescuing her. – Reuters