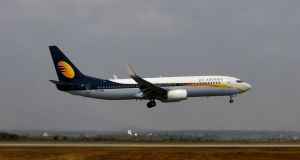 India’s Jet Airways has ordered an investigation into reports that a male pilot slapped a female co-pilot in the cockpit during a London to Mumbai flight this week.

The agency quoted an unnamed Jet Airways official as saying the pilot allegedly attacked the co-pilot after an argument with her and she came out of the cabin crying.

A Jet Airways spokesman said in a statement that a “misunderstanding” occurred between the cockpit crew but it was quickly resolved and the flight continued without issue.

The statement said the crew has been taken off flying duties.