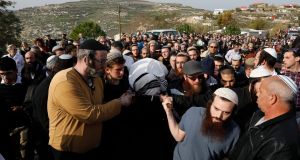 “Herein lies the true root of the conflict – the refusal to recognise the state of Israel within any borders whatsoever, along with the encouragement of the murder of Israelis,” Mr Netanyahu said.

Rabbi Raziel Shevah (35), a father of six, from the Havat Gilad outpost, west of Nablus, was killed in the drive-by shooting.

Israeli defence minister Avigdor Lieberman said he would work to turn the unauthorised Havat Gilad outpost into a government-approved settlement in response to the shooting.

Israeli soldiers sealed off villages around the northern West Bank city of Nablus as they searched for the Palestinian militants who carried out the attack.

“Security forces are pursuing the terrorists who murdered Rabbi Raziel Shevah, may God avenge his blood,” Mr Lieberman said in a statement. “I have ordered an examination of the possibility of legalising Havat Gilad and making it a community like the other settlements in Judea and Samaria,” he added, using the biblical term for the West Bank.

Turning Havat Gilad into a settlement would make it easier for the government to transfer funds and improve infrastructure, such as roads, electricity and water for the community.

The Palestinian Islamist group Hamas issued a statement praising the attack. “We bless the heroic Nablus operation which comes as a result of the Zionist occupation’s crimes.”

Hundreds attended Mr Shevah’s funeral on Wednesday afternoon– the first funeral held at the illegal hilltop outpost– and many called out for revenge.

US ambassador to Israel David Friedman condemned the attack. “An Israeli father of six was killed in cold blood by Palestinian terrorists. Hamas praises the killers and Palestinian Authority (PA) laws will provide them financial rewards. Look no further to why there is no peace,” he said.

The attack came as Israel’s defence ministry drew up plans to deduct welfare payments paid out by the Palestinian Authority to Palestinian militants and their families from the tax revenues Israel transfers annually to the PA.

Israel claims that in 2017 the PA paid more than €133 million to prisoners and former prisoners, and another €166 million to the families of suicide bombers and injured militants. The payments account for 7 per cent of the PA’s annual budget.

An Israeli planning committee was set to approve on Wednesday the construction of an additional 1,285 apartments in West Bank settlements. Mr Lieberman said the homes gaining final approval would be built “immediately” in 2018. The international community considers all West Bank settlements illegal.