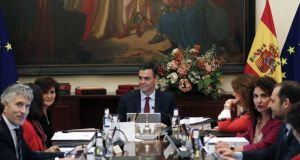 Spanish conservatives are accusing the Socialist government of being complicit in a separatist “coup d’état” due to its relationship with Catalan pro-independence parties.

Much of the dispute centres on a forthcoming trial of 18 Catalan leaders for their role in last year’s failed drive for independence.

On Thursday the supreme court concluded its preliminary investigation, paving the way for the trial, which is expected to begin early next year but still has no starting date. Nine of the defendants have been held in custody ahead of the trial, while several others have fled abroad.

The government of Pedro Sánchez needed the parliamentary support of pro-independence parties in order to win a no-confidence motion in June, which allowed him to become prime minister. He also requires their votes to approve the 2019 budget, otherwise he could be forced to call an election.

Since taking office the new government has promised to reduce tensions with Catalonia, prompting the opposition to accuse it of having a secret deal with secessionists to help it remain in power. The government denies any such accord. However, in recent weeks, several ministers have suggested that they oppose the continued imprisonment of the Catalan leaders, provoking particularly harsh criticism from the opposition.

On Wednesday, Pablo Casado, leader of the conservative Popular Party, accused Mr Sánchez of being “an accessory to and responsible for the coup d’état which is being carried out in Spain”.

He was referring to the Catalan government’s expressed aim of pursuing independence again, despite lacking an explicit strategy.

Earlier this month, Catalan president Quim Torra threatened to withdraw Catalan nationalist parties’ support for the central government in Congress if Mr Sánchez failed to agree by early November to the staging of a binding referendum on independence.

It is not clear whether the ultimatum still stands, especially as Mr Torra’s own position is fragile and the two main secessionist parties, Together for Catalonia and the Catalan Republican Left, are at loggerheads.

In Congress on Thursday, prime minister Pedro Sánchez appeared to suggest that the defendants in the upcoming trial should not be tried for rebellion, the most serious charge they could face, which carries a jail sentence of up to 25 years.

Alberto Rivera, leader of the opposition Ciudadanos, tweeted that, previously, “Sánchez saw the separatist coup against our democracy as rebellion. Now he’s in alliance with them, he defends the opposite view to see if he can cling on a bit longer in [power].”

Meanwhile, the Spanish government has said it will present a legal appeal against a recent motion by the Catalan parliament calling for the abolition of the monarchy. Government spokeswoman Isabel Celaá said the parliament’s motion had been part of “a new attempt to begin a unilateral process of proclaiming independence”.