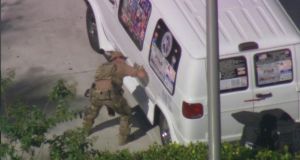 A law enforcement officer checks a van seized during an investigation into a series of parcel bombs, in Plantation, Florida. Image: via Reuters. 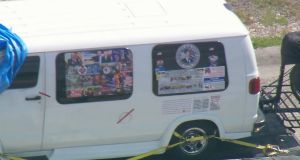 A van seized by US authorities investigating the sending of parcel bombs to high-profile critics of President Donald Trump. Photograph: Jose Romero/ WPLG/AFP

US attorney general Jeff Sessions has warned that those responsible for a series of explosive devices sent to senior Democratic figures this week will be held accountable, as a 56-year-old man was charged with five federal offences.

Cesar Sayoc, a registered Republican who has a long criminal history, was arrested by officials at a car parts store in northern Miami. He could face up to 58 years in prison.

A white van seized by authorities was adorned with political stickers showing President Donald Trump and vice president Mike Pence giving the thumbs-up sign. Another sticker showed a target around the face of former secretary of state Hillary Clinton.

Speaking at a press conference at the Department of Justice, Mr Sessions said the defendant in the case should be regarded as innocent until proven guilty. He added, however: “Let this be a lesson to anyone regardless of their political beliefs, that we will bring the full force of the law... We will find you, we will prosecute you to the full extent of the law.”

Asked why he believed the perpetrator of the pipe bomb attacks targeted Democrats in particular, Mr Sessions replied: “I don’t know. Other than what you might totally expect. It appears to be partisan but that will be determined as the case goes forward.”

FBI director Christopher Wray said that 12 devices had been recovered since the first one – addressed to billionaire Democratic Party donor George Soros – was intercepted on Monday. Each consisted of six inches of PVC, a clock, a battery, wiring and potential explosives that react to heat, shock and friction.

“These are not hoax devices,” he said. “We do believe we have caught the right guy,” he said, though he also warned: “Today’s arrest doesn’t mean we are all out of the woods. There may be other packages.”

He appealed for information from the public as he called for vigilance. “No piece of information is too small,” he said.

Mr Wray said many departments of the FBI had been involved in the investigation, including the bureau’s joint terrorism task forces, counter-terrorism division and the FBI lab. “This was a nationwide investigation of enormous scope and of the greatest importance,” he said.

The arrest of Mr Sayoc unfolded hours after it emerged that packages had been sent to New Jersey senator Cory Booker and former director of national intelligence James Clapper. The package addressed to Mr Clapper was sent to CNN’s headquarters in New York where he is a frequent contributor to news programmes. It was intercepted at a mail-sorting facility in New York City.

“This is definitely domestic terrorism, no doubt about it in my mind,” Mr Clapper said on CNN shortly after the news broke that he had been the target of a package. “This is not going to silence the administration’s critics,” he said, though he said that anyone who had criticised Mr Trump should take extra precautions when opening their mail.

A bomb device sent to Mr Booker’s office in New Jersey was intercepted at a mail-sorting facility in south Florida. Mr Booker, who is said to be considering a run for the presidency in 2020, has been a frequent critic of Mr Trump.

Tweeting before news of the arrest broke, Mr Trump urged Republicans to “go out and vote”, as he warned that the ongoing controversy over a series of bomb threats sent to well-known Democratic figures would slow momentum at the polls in the midterm elections.

Republicans are “doing so well in early voting” and at the polls, he said but “now this ‘Bomb’ stuff happens and the momentum greatly slows – news not talking politics. Very unfortunate, what is going on. Republicans, go out and vote!”

This week’s spate of bomb threats has sparked debate about the level of vitriol in US politics, with many Democrats blaming Mr Trump for inflaming tensions with hyper-partisan and sometimes violent language.

Florida Congresswoman Debbie Wasserman Schultz gave her first reaction to the developments. Her name appeared as the return address on the packages sent this week.

“It’s devastating and deeply disturbing to have my name used in that way,” she said, but added: “we are not going to be knocked down by violence and vitriol and venom.” The former chair of the Democratic National Committee (DNC) also urged her constituents to vote early and vote Democrat up and down the ballot.