Erdogan tries to turn Khashoggi case to his advantage 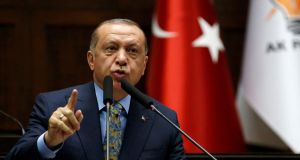 Turkish president Recep Tayyip Erdogan addressing members of parliament from his ruling AK Party during a meeting at the Turkish parliament in Ankara on Friday. Photograph: Tumay Berkin/Reuters

Recep Tayyip Erdogan this week lamented the killing of Jamal Khashoggi on Turkish soil as a “savage” crime against a man he called a friend. But the alleged murder of the Saudi journalist has also presented the Turkish president with an opportunity to gain an unexpected advantage in a regional power struggle.

On one side are Erdogan, whose roots are in Islamist politics, and Qatar, a country that has joined him in supporting like-minded actors across the region. On the other are Saudi Arabia, the United Arab Emirates and Egypt, countries staunchly opposed to Islamist political groups such as the Muslim Brotherhood, which they view as a threat to stability.

“Erdogan has grasped an opportunity to go after this tripartite alliance,” said Soner Cagaptay, director of the Turkey programme at the Washington Institute, a think tank. “And he’s now going after its weakest link.”

In the most vulnerable position is Saudi crown prince Mohammed bin Salman, who has been seen as the driving force behind some of the Gulf kingdom’s most aggressive foreign policy moves and now stands accused of ordering the killing of Khashoggi.

Turkish officials have made little secret of the fact that Erdogan sees the young heir to the Saudi throne and the kingdom’s de facto leader as a destructive force and wants to use the killing to persuade western leaders that the crown prince is a problem.

Prince Mohammed’s removal, said one Turkish official, would have a “huge impact” on the direction of Saudi Arabia. But for now that appears unlikely. There is a greater chance of Riyadh responding to international pressure by checking his power.

Turkish officials have insisted they are “honour bound” to reveal the truth about what happened to Khashoggi. But many analysts and diplomats suspect that Turkey will ultimately use its leverage to strike some kind of deal with Riyadh and Washington, Saudi Arabia’s most important backer, to ensure that the most damning evidence against the kingdom never sees the light of day.

On Wednesday the Turkish president and the crown prince spoke after weeks of circling one another. Shortly after their phone call, Prince Mohammed used his first public appearance since the death of Khashoggi to make overtures to Turkey, warning that unnamed opponents of the two countries “will not be able to divide us”.

Those words – and his mild language towards Qatar – revived suspicions that the key protagonists could yet reach an agreement that would allow Riyadh to save face.

Turkey and Saudi Arabia are the region’s two Sunni powerhouses and relations between them had warmed under the watch of Mr Erdogan, whose Islamist-rooted Justice and Development party (AKP) swept to power in 2002. Saudi Arabia’s previous ruler, King Abdullah, became the first leader of the Gulf kingdom to visit Turkey in 40 years in 2006. But tensions re-emerged after a wave of popular uprisings rocked the Arab world in 2011 and brought the Muslim Brotherhood, the region’s most influential Islamist movement, to power in Egypt.

Turkey and Qatar backed Egypt’s president Mohamed Morsi, a Brotherhood leader who cited Erdogan’s AKP as an inspiration. But Saudi Arabia and its staunch ally, the UAE, worked to undermine the government and supported the military that ousted Morsi in a popularly backed coup in 2013.

As the Arab uprisings turned sour, Turkey became a haven for opposition figures from Syria, Egypt and Yemen. “Turkey today is like London in the 1970s and 1980s,” said Ayman Nour, a former Egyptian presidential candidate who moved to Istanbul in 2015. “It’s the capital of the Arab opposition.”

Turkey’s support for such exiles grated on Saudi Arabia. So too did Turkey’s heavy dependence on Iran, Riyadh’s arch rival in the region, for its energy supplies.

The countries once again found themselves at loggerheads in June 2017 when Riyadh and its allies took the shock decision to impose an embargo on Qatar. Turkey was one of the few countries in the region to immediately side with Doha. The dispute remains deadlocked.

Yasin Aktay, an adviser to Turkey’s ruling party who has travelled with the president on trips to Saudi Arabia, said that, despite the tensions, Ankara had sought to maintain dialogue with Riyadh. “You cannot say that we had an ideal relationship,” he said. “But we had a relationship.”

But the death of Khashoggi threw a spanner in the works. “Nobody could expect us to ignore what happened,” Aktay argued. “It’s a violation of Turkey’s sovereignty.”

One Arab official believes that Erdogan saw the brazen killing of a journalist whom he knew personally on his territory as “a slap in the face”.

In the three weeks since Khashoggi made his fateful visit to the Saudi consulate in Istanbul, Erdogan has sought to make “a clear distinction” between Saudi Arabia as a nation and its ambitious crown prince, say people familiar with his approach.

“In between the lines he asked the king to throw his son under a bus,” said Soli Ozel, a professor of international relations at Istanbul’s Kadir Has University.

The ultimate outcome, analysts say, largely depends on President Donald Trump, who views Riyadh as a key US ally.

Ahmet Kasim Han, a professor of international relations at Istanbul’s Altinbas University, said that even without the removal of Prince Mohammed, there was still much that Turkey could gain from the dispute.

Possible benefits, he said, could include financial support from the world’s biggest oil producer, exemptions from Washington on new Iran sanctions, or a normalisation of Turkey’s ties with Egypt and other Saudi allies.

“Removal of Mohammed bin Salman might be the ideal situation,” he said. “Short of that, there is still a lot that Turkey can gain.” – Copyright The Financial Times Limited 2018