US will not pass trade deal with UK if Belfast Agreement undermined, Congressman says 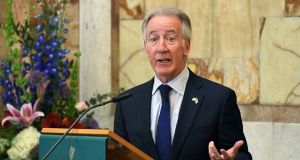 US Congressman Richard Neal speaks during a meeting with Tánaiste Simon Coveney in Dublin on April 16th, 2019. Photograph: Clodagh Kilcoyne/Reuters.

A member of the United States House of Representatives has warned that US Congress will not pass a trade deal with Britain if the Belfast Agreement is undermined.

Richard Neal, the chair of the Ways and Means committee, spoke at an event at the Irish embassy in Washington on Tuesday evening, saying:

“My committee handles trade, that is not going to happen. Period,” noting that trade decisions fall under the remit of the House Ways and Means Committee.

He said he had told the US trade representative Robert Lighthizer that the idea of a free trade agreement between the US and UK was a “non-starter” if the Belfast agreement is undermined.

“America is a guarantor of the Good Friday Agreement,” he said. “We feel a certain pride in ending the longest standing political dispute in the history of the western world. We are going to push hard against anything that might compromise our success.”

Mr Neal was speaking at an event in the Irish embassy in Washington as part of the Henry Grattan lecture series organized by Trinity College Dublin.

The Massachusetts congressman also noted the support expressed by House Speaker Nancy Pelosi for the Belfast Agreement during a visit to Ireland in April.

Recalling the Speaker’s visit to the Border area earlier this year, he said that Ms Pelosi remained “steadfast” in her commitment to the Northern Ireland peace process, and the need to preserve an open Border as a prerequisite for any future trade talks between the US and UK.

In a discussion moderated by Ireland’s ambassador to the United States, Dan Mulhall, Mr Neal recalled how members of Congress had become interested in the Northern Ireland issue in the early 1980s.

Noting the fall of the Berlin Wall in 1989 and the beginning of the end of apartheid in South America, he said that attention in the United States had begun to turn to Northern Ireland.

“People were saying - when is it Ireland’s turn?”

Introducing Mr Neal, Minister of State Ciaran Cannon referred to the ongoing Brexit discussions. “What’s certain is that the Irish government is determined to stay true to the compromises enshrined in the Good Friday Agreement,” he said.

He also said that a hard border should not be reinstated. “Any final agreement must deliver the same outcomes that the backstop was designed to deliver,” he said.

He recalled how a statue of John F Kennedy was erected in Galway in 1965. “President Kennedy’s visit lasted just one hour but a generation of Galwegians .. have carried that special day in their hearts and minds for a lifetime.”

Ambassador Dan Mulhall said it was appropriate that a “distinguished parliamentarian” such as Mr Neal was delivering the lecture given that Henry Grattan was “probably the number one Irish parliamentary figure of the late 18th and early 19th century.”