Hong Kong leader Carrie Lam was forced to abandon her annual policy address after some lawmakers jeered as she began speaking, causing an unprecedented cancellation of the speech in the legislature of the Chinese-ruled city. Video: Reuters 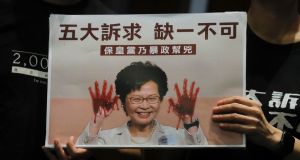 Pro-democracy MPs hold up a picture of Hong Kong leader Carrie Lam in the chamber of the Legislative Council in Hong Kong. Photograph: AP Photo/Kin Cheung

Hong Kong’s leader was forced to abandon a state of the union-type address on Wednesday after opposition lawmakers shouted her down in chaotic scenes in the legislative chamber.

When chief executive Carrie Lam took to the podium to make her annual policy address, a group of legislators chanted pro-democracy slogans and demanded her resignation, while a projector lit up her face and the wall behind with an image highlighting the core demands of the ongoing protests.

Some lawmakers wore masks showing Chinese president’s Xi Jinping’s face, while others stood on desks and brandished placards with an image of a waving Ms Lam with blood dripping from her hands – a reference to the hundreds of demonstrators who have been injured in recent months.

The live broadcast of proceedings carried by the government-run news agency Xinhua suddenly switched to bucolic scenes from rural China as the pandemonium prevailed.

The beleaguered leader left the chamber and returned after 20 minutes to try again, but she was met with a further tirade of abuse, forcing the council president to suspend proceedings once more.

She finally delivered the speech via video link from her home, some 75 minutes after the scheduled start time.

It was the first time the city’s leader was not able to deliver the annual address in person since 1948 when the tradition began, a humiliating episode for the embattled Ms Lam who has seen her ratings plummet over the handling of the pro-democracy protests that have convulsed the city for the past 18 weeks.

When she finally got to speak, she said the city was going through a “major crisis” and pleaded with the citizens to “cherish the city”, warning that “continued violence and the spread of hatred will erode the core values of Hong Kong. ”

“People are asking: Will Hong Kong return to normal?” she said.

Any hopes that she would use the opportunity to extend an olive branch to the protesters and find a way out of the deadlock were quickly dashed as her 50-minute talk instead focused on a range of social and economic measures aimed at making the city more affordable.

While she said her government would continue to respect the “one country, two systems” framework which grants Hong Kong civil liberties not available on the Chinese mainland, she warned that “any acts that advocate Hong Kong’s independence and threaten the country’s sovereignty, security and development interests will not be tolerated”.

Protesters claim the city’s freedoms are being constantly eroded and they are demanding universal suffrage so they can directly elect a leader who will stand up to Beijing. Their other key demands are a general amnesty for the more than 2,500 protesters who have been arrested since the demonstrations began, and the establishment of an independent inquiry into what they say has been excessive police force in dealing with the protests.

At a press conference after her address, Ms Lam rejected calls for her government to grant the demands.

Just hours before the address, the US Congress passed four pieces of legislation that take a hard line on China, including the Hong Kong Human Rights and Democracy Act, which mandates an annual check that the city is respecting human rights and the rule of law in order to maintain its special trading status.

While the legislation must pass the Senate and be signed by the US president to become law, China threatened “strong countermeasures” on Wednesday if it is enacted.

A foreign ministry spokesman warned the US should back out of China’s affairs, “before falling off the edge of the cliff”.