Sharp response to video of woman assaulted after sexual harassment

“Because I reacted to his harassment, a man hit me publicly on the street, in broad daylight, in front of dozens of witnesses. Unacceptable. Stop street harassment,” said 22-year-old student Marie Laguerre who was attacked outside a Paris cafe. 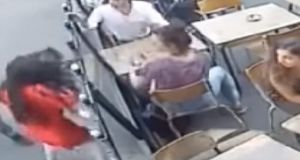 “Because I reacted to his harassment, a man hit me publicly on the street, in broad daylight, in front of dozens of witnesses. Unacceptable. Stop street harassment,” said Marie Laguerre

Outrage sparked by men punching young women on the streets of Paris and London has triggered demands for greater action to change men’s attitudes, days before France prepares to pass a law to punish public sexual harassment with fines.

In a CCTV video, which has gone viral, a man can be seen hitting 22-year-old student Marie Laguerre next to a busy cafe in the French capital, after she rebuffed his advances.

“Because I reacted to his harassment, a man hit me publicly on the street, in broad daylight, in front of dozens of witnesses. Unacceptable. Stop street harassment,” said Laguerre .

Globally, one in three women and girls experiences physical or sexual violence, the United Nations estimates.

The assault comes as a man knocked a young woman unconscious outside a nightclub on Saturday morning in Gants Hill, on the outskirts of London.

Marie Laguerre, a 22-year-old architecture student, posted surveillance footage of the assault last week near a café in Paris on Facebook. https://t.co/dumOLyAt2X

France announced a series of measures against sexual violence in March, including on-the-spot fines, starting at €90, for sexual harassment on the street and extended deadlines for filing rape complaints.

“But we need more than a change in the law, we need a culture change, and more provision and counselling for victims of sexual violence,” she said.

The #MeToo movement was triggered by accusations by dozens of women against US film producer Harvey Weinstein of sexual misconduct. Weinstein has denied having non-consensual sex with anyone.

French women shared their tales of sexual harassment last year with a name-and-shame hashtag #BalanceTonPorc or expose your pig.

France’s minister for gender equality Marlene Schiappa told local media on Monday the government was set to pass its sexual violence law by the end of the week.

“It is not acceptable that in France, in 2018, women are hit in the street because they refuse to be insulted when they walk. It is a fundamental issue of liberty,” said Ms Schiappa following the assault on Ms Laguerre.

The mayor of Paris also commended the student’s stance.