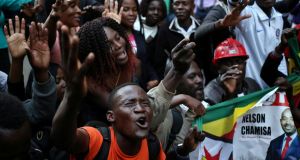 Zimbabwe’s government increased security on the streets of Harare on Tuesday after tensions rose in the capital in the wake of claims by the main opposition alliance that the general election was being rigged.

Although millions of Zimbabweans voted peacefully in Monday’s historic election, the situation began to deteriorate within 24 hours because of the Zimbabwe Electoral Commission’s refusal to release preliminary presidential results.

In response, the Movement for Democratic Change (MDC) Alliance declared that its own parallel count showed that its candidate, Nelson Chamisa, had easily beaten Emmerson Mnangagwa of the ruling Zanu-PF party in the presidential race.

The move by the MDC Alliance, which comprises five opposition parties, prompted hundreds of its supporters to start wildly celebrating victory outside its headquarters in Zimbabwe’s capital.

During a press conference to outline its concerns over alleged vote-rigging, the MDC Alliance’s Tendai Biti said: “The results show beyond reasonable doubt that we have won the election and that the next president of Zimbabwe is Nelson Chamisa.”

Within a short time, large numbers of police with water cannons began circling the city’s central business district where the alliance’s headquarters is located.

Mr Chamisa, a 40-year-old lawyer and pastor, had said before the election that he would lead mass peaceful protests if the vote was found to be rigged.

The MDC Alliance also confirmed it was preparing a court application to force the electoral commission – which has been accused of favouring the ruling party – to release the official presidential results, saying it was delaying the process on purpose.

“We are seriously concerned about evidence of interference . . . there is a deliberate delay in announcing the results. This delay is totally unacceptable,” said Mr Biti, a former minister for finance.

He added that the alliance had further concerns that ballot results were not posted outside at least 21 per cent of the country’s near-11,000 polling stations, as is required by the laws that govern the election.

Mr Biti also sensationally claimed that the country’s vice-president – retired general Constantino Chiwenga, who led the military takeover that forced former president Robert Mugabe to resign last November – had issued a directive for the assassination of Mr Chamisa and himself.

Both Mr Mnangagwa, who was installed as Zimbabwe’s interim president after Mr Mugabe’s resignation, and Mr Chamisa had said earlier on Tuesday that they were optimistic about the outcome of the election.

“Winning resoundingly . . . We’ve done exceedingly well,” Mr Chamisa said on Twitter, while Mr Mnangagwa also commented on the social media platform, saying: “The information from our reps on the ground is extremely positive! Waiting patiently for official results as per the constitution.”

On Tuesday afternoon the electoral commission released its first preliminary results in relation to the parliamentary poll, saying Zanu-PF had won six constituencies and the MDC Alliance had secured one. There are 210 constituencies up for grabs and 130 parties contesting them.

Electoral commission chief Priscilla Chigumba told reporters she was confident there was no “cheating” and said the commission would respect the will of the people. “We will not steal their choice of leaders, we will not subvert their will.”

She went to say that the presidential result was unlikely be released before Thursday; the commission officially has until Saturday to announce the winner.

While the election campaign was relatively free of violence and intimidation, the Zimbabwe Election Support Network, a network of NGOs monitoring the election, said on Tuesday in its preliminary findings that concerns remained about the independence of the electoral commission.

Elmar Brok, head of the European Union monitoring mission, said his team had noted some “inconsistencies” in the election, but that progress had been made compared to past elections.

The numerous international election observer teams invited to monitor the election from start to finish will give their preliminary findings on Wednesday.

Zanu-PF has had an iron grip on power since independence from British colonial rule in 1980, and victory for the opposition would be a major upset. It would make Zanu-PF the first former liberation movement in southern Africa that ended colonial rule to lose power in a general election.