At least 160 children exploited when trying to secure lift across border to France, says report 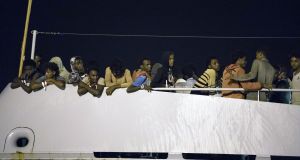 Migrants wait to disembark from the Frontex ship, ‘Protector’, at the port of Pozzallo, Sicily, Italy, earlier this month. File photograph: Francesco Ruta/Epa

Migrant children are being sexually exploited to pay for their safe passage into France from the Italian border, according to a report from Save the Children Italy. The minors, mostly from sub-Saharan Africa, are being forced to perform sex acts if they cannot afford the €50-€150 asked by drivers in exchange for a lift across the border.*

The children are also being offered food or shelter in return for being abused. The charity says it has evidence of many cases, particularly since the beginning of this year.

“These are very young, and particularly at-risk girls, who are among the invisible flow of unaccompanied migrant minors in transit at the northern Italian border who, in an attempt to reunite with their relatives or acquaintances in other European countries, are deprived of the opportunity to travel safely and legally,” Raffaela Milano, the director of Italy-Europe programmes at Save the Children, said in the report.

She added that the girls “are strongly exposed to very serious risks of abuse and exploitation” and in many cases find themselves living in conditions “of great degradation”.

The situation in the Italian border town of Ventimiglia, a major transit hub for migrants attempting to cross into France, was aggravated after a makeshift camp by the Roya river was cleared in April. Since then, migrant children had been forced to live on the streets in “degrading, promiscuous and dangerous conditions”, the report said.

The report said migrant children were also being sexually exploited in other parts of Italy, including in Rome and the regions of Veneto, Abruzzo and Marche, as well as the island of Sardinia.

The charity said more than 1,900 girls had been sexually exploited across the areas between January 2017 and March 2018, out of which it was proven that 160 were children. The report said the rest had either recently reached the age of 18 or were pretending to be adults.

“It is unacceptable that in our country children and adolescents end up in the network of unscrupulous exploiters,” added Milano.

The research follows an Oxfam report in Junethat accused French border police of illegally sending migrant children back to Italy. They were also accused of detaining children as young as 12 in cells without food or water, cutting the soles off their shoes so they did not try to attempt the journey again, and stealing Sim cards from their mobile phones.

Oxfam said at least 16,500 migrants, a quarter of them children, had passed through Ventimiglia in the nine months to April. - Guardian

* This article was amended on Tuesday July 31st.