John Cleese claims Britain has the ‘worst press in Europe’ 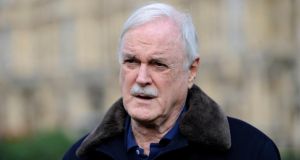 The actor and comedian made the comments during an interview on BBC Radio 4’s Today programme. Photograph: Andrew Matthews/ PA Wire

Actor John Cleese has claimed that Britain has the “worst press in Europe”.

During an outspoken radio interview, the Monty Python comedian added that he is “fed up” and leaving the UK, arguing that “corruption here is far, far worse than people know”.

Speaking on BBC Radio 4’s Today programme alongside his comedian daughter, Camilla Cleese, he said: “There’s rather a lot in this country that needs to be improved and I don’t like it when people pretend there isn’t a problem.

“I do think we have the worst press in Europe: the European Broadcasting Union poll said we were 33 out of 33 European countries in trust for printed media for four years in a row – that suggests there might need some improvement.”

“Well, I’m just fed up with it and I think the corruption here is far, far worse than people know, otherwise they wouldn’t put up with it.

“And I think the underhand arrangements that are made between [Rupert] Murdoch and [Paul] Dacre and Theresa May are absolutely disgraceful,” he said.

“There’s certain things in this country that are very, very bad indeed, a very bad state and not enough is being done about them, largely because the press censors stuff, like the fact I just gave you about the European Union poll.”

Asked if he was protesting a little too much, he went on: “[People] will find some discreditable reason, other people will say ‘Well, he’s fed up, he tried to get proportional representation’, that was buried by the right-wing press, the need . . . to get press reform, that was buried.

“Those are the two things that, if we set those right, this country would become a much better place, so if I sound grumpy, then I think . . . any kind of critic is grumpy.”

His daughter, who is appearing at this year’s Edinburgh Fringe, said: “No, I’m not grumpy ever. He’s not very grumpy either, we just came off a tour together.”

Cleese claimed his criticisms had led to personal attacks in the media.

He added: “We laugh a lot, but, you see, if people don’t like the criticism, rather than face the criticism and deal with that, they attack you at a personal level and say he’s grumpy.” – Press Association