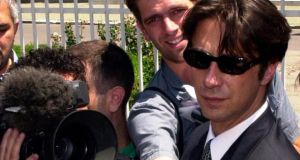 Dragoslav Ognjanovic (wearing shades) back in 2001: was shot dead on Saturday night outside his apartment block in the Serbian capital, Belgrade, and his son (26) was injured. Photograph: Darko Vojinovic

Serbian lawyers have gone on strike in response to the apparent contract murder of one of their colleagues, Dragoslav Ognjanovic, who helped defend alleged mafia figures and the country’s warmongering former leader, Slobodan Milosevic.

Mr Ognjanovic (56) was shot dead on Saturday night outside his apartment block in the Serbian capital, Belgrade, and his son (26) was injured.

The lawyer was a member of the defence team for Mr Milosevic during his trial for war crimes and genocide allegedly committed during the Yugoslav wars of the 1990s. The nationalist ex-leader died in 2006 before a verdict was given.

Mr Ognjanovic also defended gangland figures, including people connected with a bloody struggle between organised crimes groups in Serbia and Montenegro for control of the regional drug trade; another lawyer who worked for a member of one of the gangs involved in the turf war was murdered in Belgrade in 2015.

At the start of a planned week-long strike, the Lawyers’ Association of Serbia said it wanted to “send a message of the profession’s unity and its firm resolve not to stay silent in cases like this”.

The association said the strike was intended to “draw the public’s attention to the risk that lawyers in Serbia face each day in the performance of their professional work, which is aimed at protecting basic human rights and freedoms and ensuring the functioning of justice”.

“This protest demands that competent state authorities immediately put in place all available resources to solve this crime and bring the perpetrators to justice.”

During the strike, lawyers will not attend court hearings or pre-trial meetings with prosecutors.

“This killing is only the latest in a series of attacks on lawyers, many of which have remained unsolved,” the bar association said of a murder that “showed in a most drastic way” the risks that lawyers in Serbia were facing.

“I can’t say the murder has been solved, but we have some leads,” Serbian president Aleksandar Vucic said on Sunday, while insisting that the general security situation in the country was “much better than in 2001 or 2010”.

“The state must be tougher and take more serious actions to show the killers that Belgrade and Serbia won’t be a staging ground for their operations,” he added.

“The war between two clans over the drugs market is becoming something that the state must deal with seriously. We have to show the killers that they should go back to where they came from.”

Mr Ognjanovic was a lawyer for an alleged major figure in a battle over the drugs trade between two Montenegrin crime gangs known as the Skaljari and Kavac clans, which take their names from districts in the Adriatic port city of Kotor.

Hostilities erupted between them after the reported disappearance of some 300kg of cocaine from an apartment in the Spanish city of Valencia in 2014.

More than 30 people linked with the gangs have subsequently been killed in tit-for-tat shootings and bombings, and the violence has spread to Belgrade and other cities in Serbia from neighbouring Montenegro.