Zimbabwe in mood for change as voters hope for transformative election 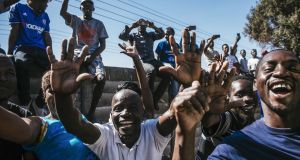 Change: the word tumbled from Mabel Maponga’s lips when she was asked what she hoped to achieve by voting in Zimbabwe’s general election on Monday.

As the 29-year-old unemployed mother waited patiently in the queue at the polling station in Musika Market in Mbare, Harare’s oldest township, she said that unless real change is achieved Zimbabwe’s future will remain as bleak as its recent past.

“We want change in so many different ways,” she told The Irish Times. “We need jobs, our children don’t go to school, there is no money in the banks, and so many of the young are forced into prostitution to survive from day to day.”

Standing beside Maponga in the queue that snaked its way through the market’s stalls was Rumbidzai Manyara. She said the only way to achieve change is to elect the Movement for Democratic Change (MDC) Alliance, a group of opposition parties led by presidential candidate Nelson Chamisa.

“They are our only hope. At the moment we only survive by helping each other,” said Manyara, adding: “Most people depend on street vending to live and the little we earn we share if we can.”

Across the southern African country Zimbabweans went to the polls in high numbers on Monday to elect a new president and parliament that they hope will implement the wide-ranging political, social and economic policies needed to tackle the societal ills described by Maponga and Manyara.

Until former president Robert Mugabe was ousted from power in November during a military takeover, Zimbabwe was in limbo, exiled from the international community due to the grave human rights abuses committed by his regime to stay in power.

Members of the security forces and Zanu-PF were regularly accused of subjecting opposition supporters to violence, intimidation and murder during the periods surrounding previous national elections.

Mugabe’s successor, Emmerson Mnangagwa, has promised that the ruling party he now leads has changed its approach to governance, and if elected president he will revive the economy and create “a new Zimbabwe for all”.

This has created an air of hope that things will change.

To achieve this revival, large-scale international investment is needed to support an economy that has shrunk dramatically since 2002. But for investors to part with their money, the hundreds of foreign election observers monitoring Monday’s poll must first deem it to be free, fair and credible.

Mnangagwa and his supporters in Zanu-PF have repeatedly promised this will be the case, but until the international observers release their assessment of the country’s election, the situation remains unclear.

Although there are 23 presidential candidates and 55 political parties contesting the general election, most experts believe the race is effectively between Chamisa (40) and Mnangagwa (75) for the presidency, and the MDC Alliance and Zanu-PF in parliament.

Both groups maintain they have the level of support necessary among the 5.6 million registered voters to win the poll.

However, a few hours after casting his own ballot, Chamisa tweeted that voting delays reported across urban areas were a “deliberate attempt” to undermine his supporters.

The opposition party has traditionally secured high levels of support in urban areas, while Zanu-PF has dominated most rural areas in past elections, although it is accused of using violence and vote-rigging to achieve this.

“There seems to be a deliberate attempt to suppress and frustrate” urban voters through “unnecessary delays”, tweeted Chamisa.

At polling stations in Highfield township on the outskirts of Harare, voters complained of having to wait hours to cast their ballots.

Felix Mukayani said that the Zimbabwe Election Commission officials overseeing the polling station he voted in were deliberately slowing down the process in order to frustrate people so they would leave.

“It was very suspicious. The officials appeared to be causing confusion on purpose,” he said.

Zimbabwe’s Catholic Commission for Justice and Peace, which has monitored the election process since campaigning started, issued a statement on Monday giving its initial assessment of the situation on the ground.

It noted there was a high voter turnout and the general environment was peaceful. However, it added that voting was slow, there was a shortage of ballot papers in same areas and a lot of voters were assisted by officials.

Early indications of the outcome of Zimbabwe’s general election will likely emerge on Tuesday.