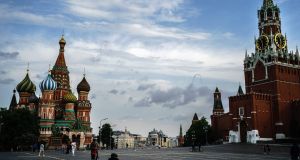 Red Square on May 30th: residents ventured out to exercise, stroll and shop on June 1st. Photograph: Dimitar Dilkoff/AFP

Russia has unveiled plans for more than 60,000 people to take part in military parades and for the nation to vote in a referendum in the coming weeks, despite continuing to record well over 8,000 new cases of coronavirus every day.

President Vladimir Putin has set June 24th as the date for military displays across Russia to mark 75 years since the defeat of Nazi Germany, and July 1st for a vote on constitutional changes that would allow him to rule until 2036.

Both occasions were postponed earlier this spring due to coronavirus, which has infected more than 423,000 people in Russia and claimed more than 5,000 lives. Data suggests the outbreak is now past its peak, but officials have reported more than 8,000 new cases every day for a month, including 8,863 on Tuesday.

“The plan is to involve 64,000 people, 1,850 weapons systems and 511 aircraft. The parade on Red Square [in Moscow] will involve about 14,000 people,” Russian defence minister Sergei Shoigu told officials on Tuesday.

“The parade will mostly involve servicemen with immunity to Covid-19 and those without any symptoms of infectious disease,” he added. “I demand that there be no contact between personnel taking part in the parade and servicemen and civilians who are not involved in preparations.”

Moscow eased some lockdown restrictions on Monday but remains the epicentre of Russia’s coronavirus outbreak.

“Let’s hope that by the time of the parade there will be hardly anything left of this [lockdown] regime,” said Kremlin spokesman Dmitry Peskov. “Without doubt, the president and guests will be on the podium [on Red Square]\. Without doubt, foreign heads of state will be there.”

The pandemic has jolted Russia’s economy and, according to some surveys, also dented Mr Putin’s popularity. Critics accuse him of risking the nation’s health to rush through the vote on constitutional reform before deepening financial hardship further sours the nation’s mood.

Election officials insist voting will be “safer than shopping” thanks to the provision of masks, gloves and pens at polling booths, the chance to vote during the week preceding July 1st to prevent any overcrowding, and the option of electronic voting in a few regions.

“We note . . . that the epidemiological situation is gradually improving. On the streets of the whole country, you see more and more people,” Mr Peskov said.

“With a high degree of confidence, we can suppose that in a few weeks . . . the situation will improve significantly. Therefore, we do not think that what remains of this epidemiological situation will somehow negatively affect turnout.”

Russian prime minister Mikhail Mishustin – who like Mr Peskov has recovered from Covid-19 – outlined an economic recovery plan on Tuesday worth about €65 billion, which Mr Putin said the government should launch next month.