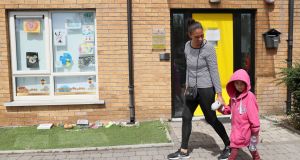 Ibti Gauthier and her son Adam (4), pass a Montessori and childcare facility in Dublin which is closed as a result of Government measures due to the Covid-19 pandemic. Photograph: Brian Lawless/PA Wire

Like no crisis before it, Covid-19 has caused unprecedented disruption to society and the economy. It has highlighted our reliance on public services, and helped us realise what are the key services and recognise who really is an essential worker. It has sparked calls for solidarity, changed the relationships between government, business and workers, and seen the introduction of many policies previously considered “impractical”.

ICTU and the trade union movement, representing 700,000 workers across the entire island, have been central to many of the measures put in place in Ireland. The Pandemic Unemployment Payment and the wage subsidy scheme have helped support incomes as well as maintain the link for many workers with their jobs. They have also upheld our collective ability to live with the necessary restrictions to protect public health.

As we move to the next stage of the crisis, the length and depth of the recession will be determined to a very large extent by the policies we now choose and by the values that guide us. Austerity is socially unacceptable and would, in any event, be entirely self-defeating. Instead, we must continue to support households and ensure vulnerable firms remain viable – to do whatever it takes to support the economy’s productive capacity. Now is not the time to “revert to type” on deficits and debt. Doing this would risk more people losing their jobs, more firms closing for good, and tipping the economy into a long decline.

The Government can manage the costs due to low interest rates and the support of the European Central Bank and the EU. When it is safe to do so, it can take the economy out of cold storage and begin to stimulate activity.

How can we go back to a housing model where the State’s main focus was on subsidising rents and developers, not on ending homelessness and building public housing?

We must ensure that Covid-19 debt does not imperil recovery. This phase in particular represents an opportunity to begin to move towards an environmentally sustainable economy, to ensure we play our part in tackling climate change.

And we have to acknowledge the many weaknesses the crisis has exposed in our pre-existing social contract. If standard unemployment and sickness benefits were not enough to live on during the crisis, how can they be enough afterwards?

If the threat to public health meant introducing a single-tier universal system, how can we go back to asking any sick person to go on a long public waiting list?

How can we go back to a housing model where the State’s main focus was on subsidising rents and developers, not on ending homelessness and building public housing?

How can we go back to treating the care and education of young children as a business, not as an investment in all our futures?

How can we go back to giving taxpayers’ monies to firms that don’t pay their fair share of tax ?

How can we go back to tolerating low pay and precarious work, including for essential workers, and not upholding the fundamental right of workers to engage collectively with employers?

Addressing these challenges is not impossible. Many other wealthy, western European countries do so. Countries that are more competitive and innovative, that create more and better-quality jobs and that are better prepared for tomorrow’s challenges – climate change, automation, population ageing – than Ireland.

The old ways failed too many people: the homeless, people on housing and hospital waiting lists, workers on low pay and with no right to collective representation

These countries do so by investing in public services, in training and in apprenticeships for young people, by ensuring real social security, and by upholding the right of workers to engage collectively with employers.

This will require additional resources. And there is scope to do so. If the amount of revenue raised by Government in Ireland is compared to that raised in these countries, clear shortfalls emerge. On average, employers in these countries pay more in social contributions than employers in Ireland, and reap the rewards, including in the form of a larger and a more highly skilled workforce. International experience suggests we can raise more from passive income, taxes on assets and levies on environmentally damaging activities.

As we prepare for economic recovery we need to plan to raise more revenue. We need to move over the medium term to standard European levels of revenue-raising. This would enable us to put a new, and better, social contract in place.

The old ways failed too many people: the homeless, people on housing and hospital waiting lists, workers on low pay and with no right to collective representation. And they were not sustainable for the environment.

For the ICTU and the trade union movement, there can be, and will be, no going back. After Covid-19, the people deserve nothing less.