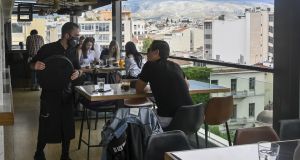 A waiter serves visitors in a roof-top cafe of a hotel in central Athens, on the first day of the opening of hotels in Greece. Photograph: Milos Bicanski/Getty Images

Irish holidaymakers will not be barred from travelling to Greece once the country re-opens to tourists later this month despite reports late last week which suggested that would be the case.

Greece has long been among the most popular destinations for Irish tourists and it is planning to allow tourists from most European countries – including Ireland – to visit from the middle of this month.

That, however, does not mean Irish people will be able to travel, as restrictions in place in this country are not likely to be lifted until towards the end of July.

From June 15th tourists will be allowed to fly into Athens and Thessaloniki airports and may be subject to random coronavirus tests, while hotels must observe restrictions on capacity and stringent hygiene rules.

The Greek minister for tourism Harry Theoharis has clarified how the new arrangements will work and confirmed that during a “‘bridging” phase in the Greek plan to reopen to tourists – stretching from June 14th to June 30th – travellers from countries not on the European Aviation Safety Agency (EASA) list of high-risk countries will be able to visit, although there may be random testing on arrival.

No Irish airport is currently on the list, which does feature 13 British airports including Manchester and the major London hubs.

“Tourists originating from airports listed on EASA are obliged to be tested once they land in Greece and remain at a designated hotel for one day,” said Mr Theoharis.

“If the test turns out negative, these visitors will then be obliged to observe a seven-day quarantine. If their sample is positive, they will remain in a 14-day quarantine, and their health will be monitored.”

Yesterday, Spain reopened nearly all of its beaches – apart from those near Barcelona – as part of its government’s efforts to revive its devastated tourist industry.

The move happened as the country reported no new coronavirus-related deaths for the first time in months.

“It’s not a question of being the first in reopening but to reopen knowing we guarantee the health not only of residents but also of visitors,” industry and tourism minister Reyes Maroto told Telecinco TV.

Transport minister José Luis Ábalos told state broadcaster TVE that some foreign tourists might be let into the Canary and Balearic Islands before the planned July reopening for international tourism.

Italy will open to all foreign visitors from Wednesday June 3rd, while France hopes to open its external borders on June 15th. Portugal never closed its doors to tourists, but most hotels and restaurants were closed until this month.

Croatia, another country heavily dependent on tourism, is allowing unrestricted access to visitors from 10 countries from June 15th. They are Germany, Austria, Czech Republic, Slovakia, Poland, Hungary, Slovenia, Estonia, Latvia and Lithuania. Citizens from other EU countries including Ireland may visit Croatia, but they will have to prove their reason for entering the country.

A travel advisory from the Department of Foreign Affairs warning against all non-essential travel overseas with the exception of Britain remains in place and under the Government’s phased exit from the lockdown, people will not be permitted to travel more than 20km from their homes until July 20th.

Faces of the future: Some of the rising stars of Ireland’s black community
9