Journalists in firing line as Trump inflames US protests

Over 100 attacks or arrests of journalists at weekend, data shows, as president turns up rhetoric

The Irish Secetary of the NUJ, Séamus Dooley, has called the violence against journalists in the US "truly shocking" with Neiman Lab reporting 110 cases of violence in four days. Video: As credited 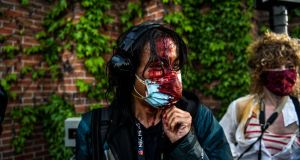 A journalist bleeding after police fired tear gas and rubber bullets in Minneapolis, Minnesota, at the weekend. Photograph: Chandan Khanna/AFP via Getty Images 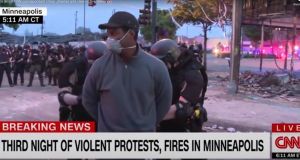 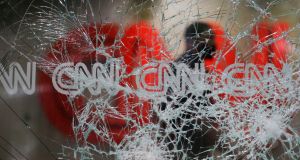 A security guard walks behind shattered glass at the CNN building in Atlanta. Photograph: Brynn Anderson/AP

“I’ve never seen anything like this,” CNN anchor John Berman said, as the network broadcast the arrest of his colleagues covering protests in Minneapolis sparked by the police killing of George Floyd.

During an extraordinary six minutes of live television, Omar Jimenez, a black reporter, narrated to the camera while a liquor store burnt behind him. He clutched his press badge as a line of state patrol officers dressed in riot gear hovered. A minute later, one officer tied Jimenez’s arms behind his back and told him: “You are under arrest.”

That was the beginning of a fraught weekend during which there were more than 100 attacks or arrests of journalists in the US, according to the US Press Freedom Tracker. The group normally tallies a similar amount of incidents for the entire year.

The tensions come as President Donald Trump has repeatedly condemned the media during his three years in the White House, labelling the press the “enemy of the people” and firing barbs at outfits ranging from the New York Times to Fox News.

The violence over the weekend spared no outlet, with incidents impacting mainstream news companies, freelancers, international media and student newspapers. Videos and photos flooded the internet over the past three days as protesters and reporters documented the scenes with their smartphones, offering high-definition footage of the clashes.

Rob Mahoney, deputy director of the Committee to Protect Journalists, said there was no precedent for these attacks on the press among western countries in the past 50 years.

“The US is really out on its own in this regard. There’s nothing on this scale in living memory,” he said, likening the behaviour of the police to the protests in Hong Kong over the past year, or in Tehran during the Arab Spring. “If you compare it with how police in western Europe or Canada deal with protests, [the US] is very different.”

In New York a Wall Street Journal reporter said the police attacked him with riot shields. In Washington, police shot rubber bullets at an NBC reporter near the White House, while protesters attacked a Fox News crew.

In Minneapolis, where the protests originated, Reuters videographers and Germany’s DW News reporters were hit with rubber bullets while police sprayed tear gas into the crowd. Linda Tirado, a freelance photojournalist, said she was now permanently blind in her left eye.

Irish in America: Have you observed the demonstrations?

Here’s how this scene was viewed live in Australia. One of America’s closest and most dependable allies. Rendered speechless. Just watch. pic.twitter.com/IjOzgs3WYo

Atlanta’s CNN headquarters were besieged by protesters on Friday night, leaving staff huddled inside the building as crowds broke the glass windows downstairs.

Trump added fuel to the fire, tweeting on Sunday that the “lamestream media” are “truly bad people with a sick agenda”. Throughout his tenure the president has encouraged distrust in the media, calling the press “fake news”. Earlier this year, he accused news outlets of exaggerating the health threat of the coronavirus.

“I’m not saying Trump is entirely responsible for this but I think he bears a significant responsibility for having failed to acknowledge the proper adversarial role a free press plays,” said Sesno. “In demonising them, and appearing at times to use the language of assault, that empowers those who feel that way.”

Analysts have pointed to militarisation of US police forces and the decimation of local newspapers as twin forces leading to this moment, fracturing the relationship between authorities and journalists in American cities.

“Part of it is familiarity. If the cops know the journalist, they will be more understanding of that person’s role,” said Ken Doctor, analyst at Newsonomics. “The waning business of the news has meant a waning understanding of the role of the press. The local press used to be an institutional power. Now it’s weak, and if you want to trample on it, it is far easier to get away with.”

The heads of news companies invoked the importance of the press in addressing staff over the weekend, as riots spread to big cities across the US.

The chief executive of WarnerMedia, which owns CNN and HBO, emailed employees declaring he would “lean into the foundation” of the company in light of the raging protests.

“Ours is a company that tells stories,” Jason Kilar wrote in an internal memo. “And stories, told well, have the power to move people in lasting ways.”

Suzanne Scott, chief executive of Fox News, told employees that “freedom of the press is a vital element to the foundation of our society” and vowed to take “all necessary security precautions” to protect its journalists in the field.

Matt Murray, editor of the Wall Street Journal, told staff on Monday that he was “infuriated” by the New York Police Department’s treatment of reporter Tyler Blint-Welsh, whose injury was “a reminder of the dangers we face covering the story”.

The WSJ is holding meetings this week to discuss security for reporters covering the protests, per the internal memo. Murray urged reporters to speak with editors and their safety team before going out in the field.

The CPJ and the Reporters Committee for Freedom of the Press are drafting a joint message to send to police chiefs, mayors and governors urging them to stand up for journalists. Networks including Fox have signed the letter.

As the news itself has been splintered across the internet, with bloggers, citizens and journalists alike posting snapshots of the riots online, the story has become a “jigsaw puzzle”, the CPJ’s Mr Mahoney said.

“One neighbourhood of a town may be in flames. The rest may be quiet. If you only focus on Twitter videos from that part of the town, you get a distorted picture of reality,” he warned. “That’s why we need journalists.” – Copyright The Financial Times Limited 2020