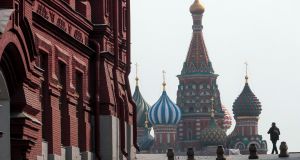 Red Square in Moscow: nearly 40 per cent of Covid-19 sufferers now on ventilators in the city’s hospitals are under the age of 40. Photograph: Sergei Ilnitsky

Russia plans to close its borders on Monday to fight the coronavirus outbreak and is urging people of all ages to stay at home during a nine-day national shutdown, as its rate of Covid-19 infections continues to climb.

Russian authorities reported a one-day record of 270 new cases on Sunday, bringing to 1,534 the number of people confirmed to have contracted the virus, eight of whom have died.

All crossing points into the world’s largest country must close on Monday, Russian prime minister Mikhail Mishustin announced, with only repatriation flights, diplomats and their families and a few other exceptions allowed to enter.

The government is also reportedly considering a suspension of domestic air and rail travel, and some cities and regions have already reduced public transport services.

The state of 140 million has dramatically tightened Covid-19-related restrictions in recent days, with the introduction on Saturday of a nine-day halt to non-essential work and the closure of restaurants, bars, cafes and most shops.

More than 1,000 of Russia’s Covid-19 cases are in Moscow, and its mayor, Sergei Sobyanin, told President Vladimir Putin last week that the country’s low level of testing for coronavirus meant official infection statistics were misleading.

Mr Sobyanin complained that 52,000 people visited the capital’s parks on Saturday, with many failing to remain a safe distance from each other, and about one-fifth of Muscovites aged 65 and over “took long trips” according to monitoring of their mobile phones.

“My dears, you are the at-risk group and with your journeys you are creating a huge danger, above all for yourselves,” Mr Sobyanin wrote on his website.

“The situation with the spread of coronavirus has entered a new stage . . . No one is safeguarded. We all see the example of the unfortunate Italian and Spanish cities and even New York, where every day tens and hundreds of people die,” he added.

“I ask you to look after yourselves. For the whole of the coming week, you and all other Muscovites need to stay at home.”

As photos of mostly young Russians gathering in parks and enjoying barbecues spread on social media, Moscow’s operational headquarters for tackling the outbreak said that nearly 40 per cent of Covid-19 sufferers who were now on ventilators in the city’s hospitals were under the age of 40.

Many Orthodox Church clerics in Russia and elsewhere have continued to hold services as normal and played down warnings about coronavirus, but Russia’s Patriarch Kirill on Sunday urged believers to “refrain from going to church” and pray at home instead.

“The church calls on you to strictly observe the obligations laid out today by Russia’s health authorities,” he told a congregation in Moscow.

“And sorry, but don’t act the fool like those who even now . . . are entertaining themselves outdoors with barbecues, music and all the rest, thinking that people have just been given a holiday,” he added.

“It is not a holiday – it is a time for concentration of thought and focus, and organisation of one’s life, family life, relations with colleagues and family and friends.”