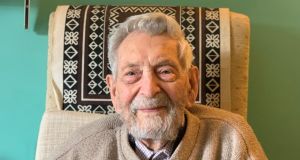 The man believed to be the world’s oldest man has said celebrations for his 112th birthday are a “dead loss” after they had to be cancelled because of the coronavirus outbreak.

Bob Weighton, from Alton, Hampshire in Britain, took up the title of the oldest man in the world last month after the death of the previous holder, Chitetsu Watanabe of Japan, and marks his birthday today.

Last year, the former teacher and engineer celebrated with his many friends at his retirement flat but this year the supercentenarian — the term for someone aged 110 and older — is under restrictions like the rest of Britain, Ireland and other countries.

“Everything is cancelled, no visitors, no celebration. It’s a dead loss as far as celebration is concerned,” he told the PA news agency.

Mr Weighton lived through the Spanish flu pandemic which swept around the world in 1918, when he was 10 years old, killing between 50 and 100 million people.

He said: “I only read about it in history books when I got older.

“Actually I wasn’t aware there was a Spanish flu around because none of my brothers and sisters, or people I knew, were affected.

“I am sure they were, but a child’s world is not an adult’s world, a child doesn’t read the newspapers and there was no radio in those days so you didn’t get news in the sense you get it thrown at you in all directions nowadays.”

Mr Weighton said that now the “world is in a bit of a mess” with coronavirus and it worries him because “nobody knows what is going to happen”.

He added that, unlike the two World Wars he lived through, the challenge of Covid-19 was the unknown elements of battling the virus.

“In the Second World War you knew what you had to do, you might fail but the objectives were clear as Churchill rallied the country behind him, ‘We will fight on the beaches’, et cetera et cetera,” he said.

“We knew exactly what we had to do. That was an objective that you could possibly reach, but nobody knows how we are going to defeat the virus.”

He said the impact on him of self-isolation was that he had become more dependent on the care home where he lives, particularly for meals and from the assistant who helps him clean and lift heavier objects.

“It means that I have to be more self-sufficient, do my own cooking, cleaning, read the books that I haven’t read.

“I am less capable of doing things for myself than I was 10 years ago — I can’t lift the weights, I can’t move as fast, I can’t even dress myself properly.

“I depend very much on other people these days.”

Mr Weighton said he had no secret to his longevity, adding: “I never intended to be this old. When you are young, you don’t think about what is going to happen when you’re old, you’re self-engaged, all you think about is the here and now.”

But he did say that his wide general interests from reading to constructing model windmills keep him active and young.

“Those are things you do either naturally or don’t do. People who complain are those who don’t explore things that they might do themselves,” he said.

Mr Weighton added that he has turned down the traditional birthday greeting from Queen Elizabeth.

“I won’t be getting one because I don’t want one,” he said.

“I had about 10 and I don’t see why I should require the Queen to keep giving me cards. It costs the taxpayer, not her, something, so I have selected one in which she is smiling, looking happy and contented and that’s the one I like and I keep that.”

Mr Weighton was born in Hull on March 29th, 1908, which, by coincidence, is the same day as Britain’s oldest woman, Joan Hocquard, from Poole, Dorset, and also the birthday of Alf Smith, from St Madoes in Perthshire, Scotland, who shared the title of Britain’s oldest man until his death last year.

Mr Weighton said: “I don’t know Joan but I would like to send her my best wishes for her birthday.”

The father-of-three — one of seven himself — has 10 grandchildren and 25 great-grandchildren. - PA