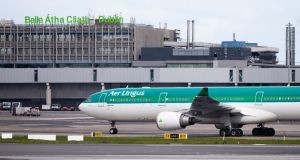 The first Aer Lingus flight to China to collect a batch of personal protective equipment (PPE) for the Irish health service arrived in Dublin on Sunday afternoon.

The flight arrived at Dublin Airport at about 3pm, having landed in Beijing shortly after 8pm on Saturday.

On Saturday, Minister for Health Simon Harris said the flight was the first of upwards of 10 flights carrying PPE, including surgical masks, gowns and eye shields for health service workers.

More than €225 million had been spent on PPE – compared with €15 million in a normal year, he said. The HSE will begin distributing about €20 million worth of PPE from Sunday evening and up to 10 further flights delivering more equipment were due between now and Wednesday, he said.

The arrival comes as stocks of personal protective equipment for healthcare staff tackling the coronavirus outbreak are “beginning to run low”, according to the Health Service Executive.

The HSE is currently seeking to redistribute stocks to sites with “particular shortages”, it said in a statement. “We are encouraging staff to use these resources appropriately at this stage of the crisis.”

One group of doctors say they have procured €6,000 worth of PPE themselves after losing patience with the HSE’s efforts to supply the equipment.

This €28 million delivery is the first batch of a large contract which the HSE says will address any current shortages.

Sources say Defence Forces trucks will be used to distribute the consignment, starting on Sunday evening.

HSE chief executive Paul Reid outlined the scale-up involved. “We would normally procure 500,000 masks a year,” he said on Sunday. “This year, up to the the end of May with our delivery we’re planning to procure over 36 million masks. On eye protections, we normally procure 200,000 a year; we’ll be procuring 24.4 million. On gowns, we will normally procure 100,000 gallons per year; we’re procuring over 24 million this year by May.

“And gloves, we normally procure four million and our plan is to procure 56 million.

“Obviously we’re as anxious as everybody, including our staff, to see every one of those flights come in with that delivery.”

Mr Reid said the first batch had been expected by Irish Government officials and deemed to meet World Health Organisation (WHO) standards. The Northern Ireland Executive is also securing PPE from China as part of a joint order with the HSE.

The first flight attracted much public attention, with officials from both China and Ireland providing regular Twitter updates on its progress. Mr Harris said: “We are doing everything that is humanly possible to secure as much personal protective equipment as we can.

“There is a shortage of personal protective equipment right throughout the world.”

The HSE in a statement on Saturday said it was seeking to manage prudently current PPE supplies “in light of the global shortage of this essential equipment at a time of unprecedented demand”.

Since February 1st, about €30 million had been invested in PPE stock, “which are now beginning to run low”.

The HSE had been urging hospitals to “preserve” stock until new deliveries arrive. The health service is short of goggles but not of other equipment such as masks, according to HSE chief operating officer Dr Colm Henry.

Dr Henry has told staff, in a memo seen by The Irish Times, to conserve stock by reducing their risk to exposure, not using PPE when they can avoid exposure, substituting some items for others, extending the use of equipment and “reprocessed” PPE.

Last week, the Irish Hospital Consultants Association wrote to the Minister for Health warning stocks of PPE were running out in some locations,“leaving frontline staff and their patients in extremely exposed positions”.

More than €60 million has been spent so far this year on protective equipment in the fight against the virus, also known as Covid-19, compared with a traditional yearly allocation of €15 million.