Coronavirus in Uganda: ‘Before the sickness comes to kill us we will die from hunger’ 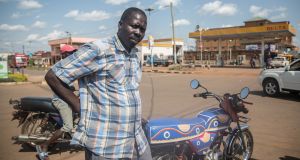 Beside a petrol station in Gulu, a city in northern Uganda, boda boda motorbike drivers lined up, scouting for passengers. They were breaking the law, but argued they had no other choice.

“It looks like we’re not listening but we’re not able to,” says Lubangakene Godfrey (40). “Me, I have no other job. Savings? My account is empty. I don’t know what to do. Before the sickness comes to kill us we will die from hunger.”

Last Wednesday night, all public transport was banned in Uganda for two weeks, including the ubiquitous boda bodas, which provide an income for tens of thousands of Ugandans. Buses and taxis have also been halted, while private cars can carry a maximum of three people.

On a good day – before the outbreak – Godfrey could earn 30,000 Ugandan shillings (€7.05), after deducting the rent for the the motorbike he drives.

“Of course I’m not very fine,” he said. “That is the only source of income we are getting. Our head is not okay. Our family are at home. We need to use money to get masks, gloves. How can the government help us?”

As he spoke, armed soldiers patrolled nearby, monitoring that the restrictions were being kept to, though people mostly ignored them. Godfrey said if someone asked him for a ride right then he would take them, using back routes to avoid newly erected roadblocks and charging the passenger a significant premium – maybe 20,000 shillings (€4.70), an amount he would never have dreamed of asking before.

Across the road, 10 people stood waiting for transport to Kampala. The price of a lift has gone up to 100,000 shillings – it was one-fifth that before the outbreak.

Uganda now has 33 cases of coronavirus, all declared within the past week. Borders are closed, as are schools and bars. Security forces have used force, including beatings and gunfire, to disperse customers and traders in Kampala. Two men were shot by police for riding on motorbikes.

In Gulu, an alleged thief was beaten by a mob this week. Crime is expected to rise, as people struggle to support themselves.

In an address to the nation on Tuesday, Ugandan president Yoweri Museveni warned traders against increasing food prices. “I hear there are crooks hiking the prices of food,” he said. “I will send my spies to the market and if I find anybody hiking the prices, I will cancel their licences.”

The address led some Ugandans to question why Museveni couldn’t follow the lead of Kenyan president Uhuru Kenyatta, who announced he would take an 80 per cent pay cut in light of the coronavirus outbreak.

At least 21 per cent of Ugandans already live below the poverty line, and they are desperate for social protections.

In Gulu, where residents have experienced both an Ebola outbreak and decades of war, locals said the latest restrictions are – in some ways – unlike anything they’ve seen before.

In a food market, traders attempted to protect themselves from any possible transmission. Signs saying “Keep distance” and “Don’t cross nor touch anything” were hung on string, woven around beams, to try to keep customers away, but space was limited. One potential buyer stuck her hands into a bag of beans, picking up fistfuls and running them through her fingers to examine the quality.

“Now we don’t know if they’ll close the market,” said Ramadan Nokrach, a 53-year-old trader, who admitted to raising prices. He said he was compelled to because his beans are imported from Tanzania, Rwanda, and Kenya, and the cost of transport has increased significantly. While 1kg now costs 6,000 shillings (€1.41) – an increase of one-third – he said he only makes 500 shillings profit on each one.

Banana seller Caroline Akidi (56) was forced to reduce prices instead. “We were worried they’ll go rotten,” the mother of six said. “I’m feeling very bad, I don’t know how we are going to survive.”