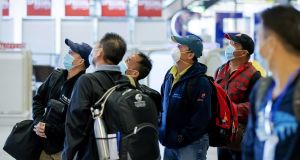 Passengers in the departure halls that are still open at Schiphol, the Netherlands. Photograph: Robin Van Lonkhuijsen/EPA

The next test of strained relations between the Dutch and their EU neighbours, after the fortnight-long car crash of a negotiation that resulted in Thursday’s €500 billion rescue package for those worst hit by the Covid-19 pandemic, could well be over whether Europe still needs an airline tax.

Amid bruised egos and battered solidarity, finance ministers finally agreed on Thursday that the coronavirus aid will be paid as loans through the European Stability Mechanism (ESM) – rather than as “corona bonds”, which would have mutualised the debt across the bloc.

The idea of sharing the debt in the form of one-off euro bonds was opposed by Germany, the Netherlands, Austria and Finland, though the Dutch were the most obstinate in their opposition, trading insults with Italy, Spain and Portugal as the deadlock deepened and the death toll mounted.

As it counts the human cost of the pandemic, Europe is heading into deep recession, with the negative impact on the euro zone expected to be at least 2.5 per cent, with international supply chains threatened, and many sectors, such as the overcrowded aviation industry, taking a huge hit.

Major airlines such as British Airways, Air-France KLM, Lufthansa, Alitalia, Ryanair and EasyJet are scaling back their operations. Lufthansa has reduced the size of its fleet by one-tenth and grounded its low-cost subsidiary, Germanwings. Austrian Airlines has cancelled all flights until May.

The picture is much the same in the US, where President Donald Trump’s ban on long-haul flights from Europe has created “total pandemonium”, according to the union representing flight attendants at 20 major airlines. United Airlines borrowed $2 billion (€1.8 billion) last month, Delta borrowed $1 billion, while American Airlines borrowed $500 million.

So critical is the situation, according to the Sydney-based research network Centre for Aviation, that the international airline industry could face collapse as soon as May, with the loss of hundreds of thousands of jobs worldwide, unless governments are willing to make serious cash commitments – not tomorrow but now.

Against that global background, it was surprising in mid-March to see the Dutch government renew its long-term commitment to introduce a new €7 tax on all flights, irrespective of their destination, from January next, despite repeated calls from the airline industry to put the plan on hold due to Covid-19.

At the end of last year, Dutch taxation minister Menno Snel revealed that he had put together an informal nine-country coalition – including Germany, France, Italy, Sweden, Denmark, Belgium, Luxembourg and Bulgaria – in support of the tax on the basis that air travel generates about 2.5 per cent of CO2 emissions globally.

He left the door open very slightly for Brussels by saying the Netherlands and its allies might be willing to drop the plan if the EU Commission agreed to adopt a new EU-wide aviation tax and end aviation subsidies. Specifically, he wanted a European levy on aviation kerosene – which has been exempt from tax in every country in the world since the Chicago Convention on Civil Aviation of 1944, a time before climate change became an issue.

Given the impact of Covid-19, the airlines might reasonably have expected the aviation tax to have been put on hold, but the Dutch government announced mid-March that it was pressing ahead despite the pandemic, convinced that the time had come for a new aviation landscape.

“The measure isn’t perfect but it marks a shift in our thinking about aviation and the social cost of flying,” said junior finance minister Hans Vijlbrief. “It’s a small step, but there’s currently no tax on flying and that’s not sensible.”

A debate in parliament found no real opposition. All four Rutte coalition parties are in favour – in fact, it’s in their programme for government – with four of the opposition parties, including GreenLeft, arguing the tax should be higher. Only two parties were opposed: Geert Wilders’ Freedom Party claimed it was unlikely to reduce the numbers flying and was therefore only a tax-gathering measure, while the Socialists argued that it would penalise the least well-off.

There was not a word from any of the parties about the impact on airlines, despite warnings from the International Air Transport Association, the airline trade association, that it could damage the competitiveness of the Dutch aviation industry and potentially cost as many as 84,000 jobs.

In that context, the global data gets worse every day. For example, as of April 3rd, international seat capacity had dropped almost 80 per cent on a year ago, while half the world’s airliners are now mothballed, according to travel industry data company, ForwardKeys.

There’s a real possibility that some airlines may not survive while others may emerge from the Covid-19 crisis much smaller than before.

That will affect the viability of airports. And that’s before the potential changes in passengers’ flying habits or the effect of coronavirus on CO2 emissions can even be measured and factored into the equation.

So while Italy and perhaps even France, among others, may have misgivings about the wisdom of future collaboration with the Netherlands after the Covid-19 debacle, they might do well to pause.

Given the degree to which the aviation industry is being transformed for better or for worse at this very moment, it may indeed be – as the Dutch are counterintuitively arguing – the right time to get involved in designing a new, more made-to-measure, global industry.