‘No beating!’ On patrol with the Ugandan military enforcing curfew 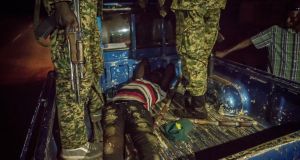 Soldiers look down at a man they have caught violating coronavirus restrictions. At one point, one of them kicked him in the head. Photograph: Sally Hayden

Outside the central police station in Uganda’s northern city of Gulu, dozens of uniformed soldiers and police officers stood in lines, listening to orders before they set out to enforce the new coronavirus curfew.

“No what?” shouted the officer in charge.

“Beating,” came the reply, in unison.

“No what?” the officer barked again.

Watching from a distance, another soldier looked sceptical, muttering, “at this time we should not talk about rights, we should talk about corona”.

Uganda, a country with a population of more than 44 million, has only 54 confirmed Covid-19 cases so far, but, like many neighbouring countries, it has shut its borders and introduced extensive restrictions. No vehicles can move without express permission, shops selling non-foodstuffs are closed and a curfew is in place between 7pm and 6.30am.

The army and police are in charge of enforcing the new rules, which has already led to turmoil. Last week, Uganda’s president Yoweri Museveni ordered “indisciplined” security forces to stop assaulting civilians while doing their job. “Beating people is not part of security work,” he said, during a national address. “Even cows, we don’t beat them these days.”

I had already interviewed Ugandans who said they had been thrashed in the head, legs, and back, as well as having money and phones stolen by security during the lockdown. Now, I wanted to witness things from the other side. Major Olweny Caesar, a public information officer in the Ugandan army, agreed to let me patrol with them after curfew. As the sun set and briefings ended, we loaded into a pick-up truck, two armed soldiers in camouflage standing in the back.

Driving through the streets of Gulu, a city with roughly 150,000 residents, individuals began to emerge through the darkness. First, we came upon men carrying bags on their heads. “It’s not our fault, the vehicle delayed us,” they apologised. “Can you imagine?” responded Caesar. “What vehicles are carrying people now?”

The soldiers tried to question two strolling boys, who begin to sprint in opposite directions. Then, Caesar saw a man and a baby. “You people get inside, why do you people look for problems?” he shouted.

“This place, they are very, very stubborn here,” he said, as the pick-up truck stalled. “That is why sometimes we are beating these people.”

One of the problems is lock-ins, he said; when locals gather to drink in a building but shut all doors and windows, it’s difficult to spot it from the street. Ugandan security are known to recruit “operatives” who can pose as drinkers and send information about who is breaking the law, but often just extort the guilty instead.

Caesar yelled at a man roasting pork outside a bar he claimed to live in. “I am not coming to see your bed, I am coming to tell you that what you are doing is wrong,” Caesar said. “We are doing it for your health.”

“Can you go home? If you don’t have a home I will tell you where to go,” he bellowed next, at a smiling teenager.

At one point, the major stopped the vehicle, ordering a young man to “lie down” on the ground, as another soldier handed over a cane. Caesar waved it threateningly, before letting the man go home. Then he hollered at a woman that she is likely to get raped if she stays on the streets at night.

Leaving the city to travel southwest, the roads were in darkness. Many houses have no electricity. Our headlights kept surprising and then scattering lone walkers. High grasses lined the roads for much of the drive, and people kept jumping into the bush to get away. “There is no reason for chasing them,” said Caesar, continuing on. “The arrest, we mainly don’t do that. What we mainly try to do is educate them.”

‘I will cane you’

After about 25km, we reached a district called Ongako. Nearby, a man was sitting at the side of the road waiting for his girlfriend. “I can’t beat him, it would cause problems in the relationship,” Caesar told me, instructing the man to disappear.

When I asked about the presidential directive for beatings to stop, Caesar said he agrees it’s not a “mature” thing to do. “I personally don’t believe in beating because someone mature shouldn’t be beaten. But I also don’t want to be squeezed to the wall because you are mature and don’t want to listen. If you force me to beat I will beat you as long as I know I’m doing it for your own good.”

At about 9pm, Caesar came upon a truck and commanded the driver to get out of the car. “I will cane you,” he said. “It’s not about argument, okay?” But he eventually let them leave.

Then, spotting someone crouched on the side of the road, the pick-up stopped again. This time, the man they caught began answering back, after trying to escape. One soldier slapped him in the face, forcing him to the ground. “Stop,” Caesar shouted, looking around at me. The two soldiers pulled the man into the vehicle’s cargo area. As I watched, one kicked him in the head. “Time to go,” Caesar interjected, saying they were going to drop both me, and the assaulted man, back into the city.

“Let us keep him in the police station until morning. I don’t even want a case. Tomorrow when the curfew is over he walks back home. That is a good punishment.”