HSE chief executive Paul Reid says that a backlog of 35,000 coronavirus tests in Ireland has been reduced to 11,000 thanks to additional capacity provided by a testing lab in Germany. Video: RTÉ 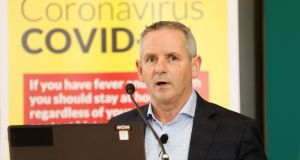 Thirty-one more people have died from the coronavirus in the Republic, as the number of known cases has now surpassed 10,000.

Twenty-five of the patients who died had underlying health conditions, according to the National Public Health Emergency Team (NPHET). Thirteen of the deceased were men and 18 were women, with a median age of 82.

There are now 10,647 known coronavirus cases in the State, and 365 people have died from the virus.

Health officials announced a further 527 new confirmed cases on Monday, along with 465 further positive cases from tests sent to a German laboratory to clear a waiting backlog on results.

The majority of the deaths (26) are located in the east of the country, with three in the northwest, one in the south and one in the west.

Any easing of the current restrictions, in place to prevent the spread of Covid-19, would be “conditional” and would quickly be reversed if required, the State’s chief medical officer Dr Tony Holohan said on Monday.

Social distancing and other restrictions would likely need to be in place until a vaccine was available, which would not be in the “near term”, Dr Holohan said.

Until that point the country would be dealing with “restrictions of one kind or another”, he said.

“Anything that changes on the 5th of May or beforehand is going to be conditional”, and would depend on the reaction of the virus among the population, Dr Holohan said.

“As we identify a restriction that we might ease or remove, there is a possibility the risk of infection will go up and go up more than we think, and we have to be able to pick that up and respond to that quickly,” he said.

Kathleen MacLellan, Department of Health head of social care, who is overseeing the response to Covid-19 in residential settings, said early international information around the virus and nursing homes was “fairly scant” but had been followed by the health service.

Currently there are confirmed cases in 268 long-term residential facilities, 214 of which are nursing homes, and 32 in centres for people with disabilities.

Ms MacLellan said there was “no doubt” that congregated living arrangements in nursing homes and disability centres was posing a “unique challenge” in containing the spread of the virus.

Residential centres for people with disabilities in particular have had to carry out a “significant amount of work” to set up isolation spaces, she said.

Earlier on Monday Minister for Health Simon Harris said social distancing measures would likely need to stay in place until a vaccine or effective treatment is available, the timeframe for which is expected to be several months.

The backlog of Covid-19 tests has been reduced from a high point of around 35,000 people waiting for results to some 11,000. Paul Reid, HSE chief executive said he expected the backlog to be fully cleared by the end of the week.

The HSE is investigating an issue involving people having been incorrectly informed their test for coronavirus was negative, when in fact they had contracted the virus.

A spokeswoman said the HSE had identified “less than 100 people” who were incorrectly informed about the result of their test.

The error occurred in tests where the original result was unclear or “indeterminate,” but people were informed it had been negative, she said.

When the National Virus Reference Laboratory in UCD reviewed the indeterminate results and re-tested the original samples the results came back as a weak positives.

“Unfortunately these indeterminate cases were initially reported as not detected and consequently were notified to people as such,” the spokeswoman said.

People who had been incorrectly informed by text that their test had been negative were then later told of the positive result in phone calls from contact tracing teams, following the review of the samples by the lab. Contact tracing teams alerted the HSE to the issue on Saturday.

“We are satisfied that no other patient has been impacted by this error. The HSE apologises for this error, and every effort has been made to ensure that the correct information is communicated to these patients without delay.”

The issue emerged at a HSE briefing on Monday during which Mr Reid said the State’s coronavirus testing backlog had been reduced from a high point of around 35,000 people waiting for results to some 11,000.

He said 25 laboratories were now being used to examine Covid-19 tests, including 20 in hospitals, the national lab in UCD, a Department of Agriculture facility and centre in Germany, which has assisted in reducing the results backlog.

Speaking at a press briefing in Dublin on Monday, Mr Reid said nearly 8,000 tests were completed on Saturday.

“We did build up a significant backlog . . . that backlog will continue to be reduced and will be reduced completely by the end of this week,” he said.

Mr Reid said some 72,000 tests had been completed in the State to date, and that this has doubled “in a very short time”.

Increased testing capability is regarded as essential by the Government in considering plans to ease restrictions on personal movement, which are in place until May 5th at least. Senior Government figures stress that while they do not want to extend the restrictions further, they will do so if it is deemed necessary.

It is hoped the current lockdown slows the virus to such an extent that will allow “space” for some restrictions to be eased – such as some pupils being allowed attend school on a limited basis – without risking a substantial rise in infections; if this happens, stricter measures will be reintroduced.

“Very preliminary work” is being carried out by health officials on how to “ease the restrictions”, according to a senior Government source, but the rate of reproduction of the virus must drop in the coming weeks before the limitations on economic and social life will be relaxed.

To consider lifting restrictions, Mr Harris has said the growth rate of the virus, which is now just below 10 per cent, needs to fall below 5 per cent; and that the average number of people in intensive care units being treated for Covid-19 needs to drop to near 100 from a current level of about 150.

Mr Harris also said the reproductive rate of virus – the rate which measures how many people each infected person is likely to pass the virus on to – is now “in and around” one.

A reproductive rate of 0.6 or 0.7 is said to offer the “space” to ease some restrictions and monitor the effect of such a move while allowing stricter measures to be brought in again if needed without risking a dramatic spike in new infections.

The State’s testing backlog was created after the criteria for referral was expanded to anyone with one of the symptoms of the virus, and has since been revised to focus on priority cases.

The current demand for tests is around 1,200 per day, and 800 people are waiting to get an appointment at a testing centre, Mr Reid said.

Outbreaks of the virus in nursing homes were an area of “significant concern”, the HSE’s chief operations officer Anne O’Connor told the briefing.

There have been positive cases of Covid-19 in 268 long-term residential settings, 214 of which were nursing homes. The health service had also identified cases in 32 residential centres for people with disabilities, 14 in mental health residential facilities, four direct provision centres, and three prisons, Ms O’Connor said.

The HSE has had to increase deliveries of personal protective equipment (PPE) to nursing homes to combat outbreaks of the virus, she added.

Chinese authorities have increased controls and quality checks on PPE shipments leaving the country, which Mr Reid said would have an “impact” on the turnaround times of orders from Ireland.

There was also a “significant” pressure around the availability of PPE gowns across the system, and “until we secure a further delivery from China we will be tight on gowns in some places”, he said.

In some cases protective gear is being redistributed from hospitals or community healthcare settings not yet hit by the virus to under pressure areas such as Dublin, Mr Reid said.

The health service is in the process of finalising contacts for 1,200 people as part of the On Call campaign to recruit medics back into the public system.

This is in addition to 300 medical interns who will join the frontline effort, and 4,500 non-final year student nurses who will work as healthcare assistants.