Indonesia rescue team detect no signs of life beneath rubble

Footage from the Indonesian Red Cross on October 3 showed the village of Petobo five days after a 7.5 magnitude quake hit the west coast of Sulawesi island. Home to 500 people, disaster responders said the village had been 'wiped off the map'. 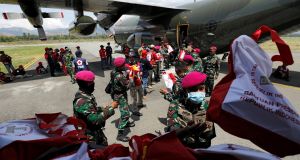 French rescuers have been unable to find the possible sign of life they detected a day earlier under hotel rubble in Indonesia’s central Sulawesi, a week after a destructive earthquake and tsunami struck the island.

The five-member International Emergency Firefighters team said late on Thursday its sensor “detected the presence of a victim” under thick concrete in the wreckage of the Mercure Hotel in Palu city.

The device can identify breathing and heartbeats, but gas leaks and other factors can result in false positives.

The team stopped digging overnight. But after an hour of searching on Friday morning, team member Philip Besson said they could not find the signal again.

“We are perplexed and frustrated mostly. We strongly believed in it yesterday. Now we have nothing at all . . . we tried everything and have no response,” he said.

Local rescuers were continuing to dig at the collapsed hotel. The French rescuers said on their Facebook page that 40 people including six workers are missing from the hotel.

The death toll from Friday’s 7.5 magnitude earthquake that spawned a tsunami has risen to 1,558, with scores more believed buried in deep mud and under debris of collapsed buildings and homes.

The national disaster agency said the body of a South Korean man was among eight dead pulled on Thursday from the wreckage of another hotel in Palu, the Roa Roa, which collapsed sideways in a heap of cement and steel.

Local television said the man, the only foreigner known to have died in the disaster, was a paraglider taking part in an event in the area.

Thousands have been injured and more than 70,000 evacuated to shelters and makeshift tents that have sprouted across Palu, the provincial capital of Sulawesi island that is home to most of the victims, and its surrounding areas.

After days of initial chaos and looting by desperate survivors, some stability has returned to Palu with some shops reopened and electricity restored in some parts of the city.

He said the Palu airport will also be resume operations for passenger planes soon.

Officials said more volunteers will fan out across outlying areas cut off by the disasters to distribute aid to survivors.

“The earthquake and tsunami cut off many transport routes in this remote area. We sent out three teams, on different routes, with as many supplies as they could carry to ensure we could reach people as fast as we could but the journey has taken days.

“We are relieved that these much-needed supplies have arrived by plane and are starting to get through,” Zubedy Koteng from Save the Children said in a statement.

Save the Children said it has sent more than 1,000 kits to support shelter, hygiene, child-friendly spaces and temporary educational facilities.

“Children urgently need shelter and essential hygiene items to prevent the spread of diseases and contamination as families are packed into evacuation centers with limited supply of clean water,” Koteng said.

Indonesian vice president Jusuf Kalla, who arrived early on Friday in Palu to assess the situation, said it will take at least two years to redevelop and reconstruct the disaster zone. – AP