Hague Letter: a survey found 89% of respondents said they went shopping at least once despite having possible Covid symptoms 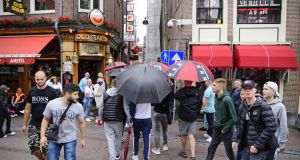 Tourists in the “red light district” of Amsterdam, the Netherlands, on July 25th. Photograph: EPA/Olaf Kraak

Human nature never fails to perplex. With perhaps as many as 10,000 dead in the Netherlands since the Covid-19 crisis began, you’d imagine those lucky enough to remain unaffected would become more careful as the disease progresses. Not so, it seems. There’s a certain recklessness in the air.

If that assessment seems harsh then cast your eye over the latest in a fascinating series of rolling surveys by the Dutch public health institute tracking changes in attitudes towards the government’s coronavirus regulations since the lockdown began on March 15th. It makes for sombre reading.

The survey is updated every six weeks, and as recently as Friday last – amid warnings that the rate of infection has been rising again and that regional lockdowns may be necessary to deal with hotspots – the public mood was best summed up as a weary and rather unconvinced shrug of the shoulders.

The main findings are quite remarkable: Ignoring the core rule to stay at home if you feel you may be infected, 89 per cent of respondents admitted they had gone shopping at least once despite having possible symptoms, while 63 per cent visited relatives and friends, and almost half went to work.

In the first survey at the end of April, 63 per cent of those questioned said they had been careful never to come too close to family members or friends. That figure has now fallen to 28 per cent.

Half of respondents said they had been to crowded places where the 1.5 metre social distancing rule was impossible to maintain and had remained there nonetheless. Supermarkets posed the greatest risk, but bars, cafes, cultural centres and sports venues were all repeat offenders.

And with mass testing available since June 1st for anyone who feels unwell, only 19 per cent were willing to say that if they experienced typical symptoms – such as a sore throat or shortage of breath – they would certainly have themselves tested.

As in so many other countries, confusion over the wearing of masks continues. The only setting in which they are obligatory in the Netherlands is on public transport. Even so, 43 per cent of respondents said they simply did not believe masks play a significant role in halting the virus.

Essentially the only rule nobody has any problem with is not shaking hands. The handshake is now firmly a thing of the past, abandoned by 98 per cent of respondents.

The remarkable thing about this survey is not that so many people are being wilfully irresponsible about their own health, but that they are so apparently unconcerned about putting the health – indeed lives – of family and close friends at risk as well.

After all the entire country has been riveted by the tale of a bar in Hillegom, a town in the tulip-growing heartlands, where the owners promised on Facebook early in the pandemic that nobody would be “reprimanded” under their roof for “sitting close together, shaking hands or hugging”.

“We know what we’re doing,” wrote the owners of De Kleine Beurs pub, Boy Hardeman and his wife Wanda. “For many people the bar is traditionally the one place where they don’t have to stick to all life’s rules.”

Last week, having reopened on July 1st with the rest of the country’s restaurants, bars and cafes, De Kleine Beurs was rapidly closed again by the health authorities after 39 cases of Covid-19 were traced directly to its door – 31 infected there and the other eight contaminated indirectly.

The owners of what at this moment is probably the Netherlands’ best-known bar say they are “mystified” by the outbreak.

With 6,136 deaths so far in hospitals and 40 per cent more expected to be added to that tally when nursing homes are included, part of the wider problem in recent weeks has undoubtedly been that the government has eased its relentless messaging campaign just when it was clear it was working.

The issue of masks is unresolved and so in many cramped barber shops, for example, they are simply not being worn at all. Many supermarkets have become lax about cleaning trolleys and even refilling disinfectant.

It’s the old Dutch contradiction: everyone rides a bicycle but nobody wears a cycling helmet. Risk is simply not treated with the respect it deserves – and that is invariably a mistake.

After an impressive start by the Rutte government, much of the ground gained is in danger of being relinquished.